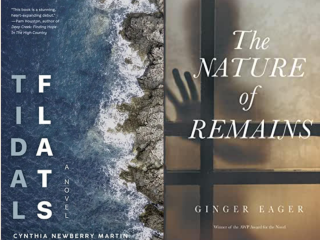 In this elegant and honest novel, Cass and Ethan must navigate fine lines between the things they want individually and the life they want together, and it appears each will have to compromise...

A Cappella Books welcomes back award-winning author Cynthia Newberry Martin for an afternoon discussion and book signing in honor of the paperback release of her debut novel, “Tidal Flats.” Martin will appear in conversation with Ginger Eager, recipient of the 2021 Georgia Author of the Year award for her novel, “The Nature of Remains.”

This event is free and open to the public, and copies of both titles will be available for purchase. Masks are required.

This is the story of a marriage.

Mary Cassatt Miller falls for famous photojournalist Ethan Graham. But it's complicated. For months at a time, Ethan's work takes him to Afghanistan, and Cass, who's passionate about her job in Atlanta, wants a husband who comes home at night. Then, there's the issue of family--he wants one; she doesn't.

What they do want is a life together, so Ethan agrees that after three years, he will stop traveling--whether Cass agrees to children or not. But for Cass, who grew up with a mother who didn't want her and a father who was never home, even thinking about children is troubling.

Now, nine weeks before their third anniversary, Cass wonders whether Ethan will try to squeeze in one final trip to Afghanistan. When he does, she's unsure if he will ever give up the work he loves. And if he won't, well, she will not repeat the life her parents had.

As the clock counts down, it doesn't help that Singer, the artist-bartender, is always in Atlanta, and the enthralling Setara, the subject of Ethan's most famous photograph, is also his business partner. Then, a new danger in Afghanistan changes everything.

In this elegant and honest debut novel, Cass and Ethan must navigate that fine line between the things they want for themselves and the life they want together, and it appears that Cass will have to choose one or the other.

Cynthia Newberry Martin grew up in Atlanta, Georgia. After first practicing law, she earned an MFA from Vermont College of Fine Arts. Her website features the "How We Spend Our Days" series for writers. She lives in Columbus, Georgia, with her husband, and in Provincetown in a little house by the water. "Tidal Flats" is her first novel.

About "The Nature of Remains"

In the tiny town of Flyshoals, Georgia, karma is writ small enough to witness. When Doreen Swilley discovers that her boss, who is also her lover, intends to fire her in order to placate his dying wife, she devises a plan to steal his business from him. Her plan just might work too, if she is not thwarted by a small town's enmeshed histories and her own dark secrets.

Set during the 2009 recession, "The Nature of Remains" rests at the intersection of class, gender, education and place. Eager's deeply drawn characters endow this novel with profound authenticity. Through extended geological metaphor, we witness the orogeny, crystallization, and weathering of the human soul. The forces impacting Doreen reflect how even a woman's most precious connections--her children, her grandchildren, her lover--operate within larger social structures that challenge her sovereignty.

Ginger Eager's debut novel, "The Nature of Remains," won the AWP Award for Fiction, was chosen as a 2021 Books All Georgians Should Read, and won a 2021 Georgia Author of the Year Award in the First Novel Category. Her short stories, essays, and book reviews have appeared in various journals, including Arrowsmith Press, On the Seawall, and South Writ Large. She lives in Decatur, Georgia and is at work on a novel about ecological grief.