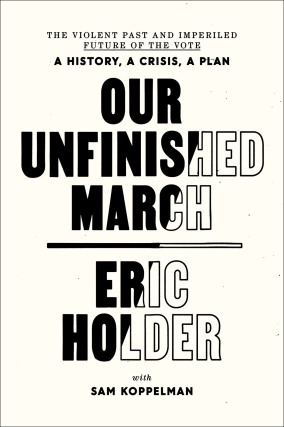 A brutal, bloody, and at times hopeful history of the vote; a primer on the opponents fighting to take it away; and a playbook for how we can save our democracy before it’s too late—from the former U.S. Attorney General on the front lines of this fight.

The Jimmy Carter Presidential Library and A Cappella Books are honored to welcome Chairman of the National Democratic Redistricting Committee Eric Holder to The Carter Center for a discussion of his new book, "Our Unfinished March: The Violent Past and Imperiled Future of the Vote-A History, A Crisis, A Plan" on Monday, May 16, at 7 PM. Holder will appear in conversation with former Atlanta mayor Keisha Lance Bottoms.

Tickets include admission for two and one signed copy of the book plus tax ($30.50) plus Freshtix service fees. You can skip the service fees by purchasing your ticket at our store.

Voting is our most important right as Americans—“the right that protects all the others,” as Lyndon Johnson famously said when he signed the Voting Rights Act—but it’s also the one most violently contested throughout U.S. history. Since the gutting of the act in the landmark Shelby County v. Holder case in 2013, many states have passed laws restricting the vote. After the 2020 election, President Trump’s effort to overturn the vote has evolved into a slow-motion coup, with many Republicans launching an all-out assault on our democracy. The vote seems to be in unprecedented peril.

But the peril is not at all unprecedented. America is a fragile democracy, Eric Holder argues, whose citizens have only had unfettered access to the ballot since the 1960s. He takes readers through three dramatic stories of how the vote was won: first by white men, through violence and insurrection; then by white women, through protests and mass imprisonments; and finally by African Americans, in the face of lynchings and terrorism. Next, he dives into how the vote has been stripped away since Shelby—a case in which Holder was one of the parties. He ends with visionary chapters on how we can reverse this tide of voter suppression and become a true democracy where every voice is heard and every vote is counted.

Full of surprising history, intensive analysis, and actionable plans for the future, this is a powerful primer on our most urgent political struggle from one of the country’s leading advocates.

Eric Holder is a civil rights leader who is chairman of the National Democratic Redistricting Committee. He served as the eighty-second attorney general of the United States, the first African American to hold that office. Now a senior counsel at Covington & Burling, he lives in Washington, D.C., with his wife, Dr. Sharon Malone. The couple have three children.

Sam Koppelman is a New York Times bestselling author who served as director of surrogate speechwriting on the Biden-Harris campaign. A graduate of Harvard College, he is now a principal at Fenway Strategies, where he has spent half a decade telling the stories of people working to make the world a better place.

Keisha Lance Bottoms is a CNN Political Commentator, based in Atlanta, Georgia, where served as the 60th Mayor. Keisha served as Mayor during one of the most challenging times in the history of Atlanta. In the midst of a global pandemic and a racial justice movement, Keisha became a leading spokesperson regarding the challenges and opportunities facing cities and leaders across America. Keisha became the first Mayor in Atlanta’s history to have served in all three branches of government, having previously served as a Judge and a City Councilmember. As Mayor, she committed herself to realizing her vision of “One Atlanta” – an affordable, resilient, and equitable Atlanta.

Keisha was named 2020 Georgian of the Year by Georgia Trend Magazine. She also was named one of Glamour Magazine’s Women of the Year and was named a member of Ebony Magazine’s prestigious Power 100 List. She has also been honored as a BET 100 Entertainer and Innovator of the Year and was named the Smart Cities Dive’s 2020 Leader of the Year. Keisha was also the recipient of the Distinguished Civil Rights Advocate Award presented by the Lawyers' Committee for Civil Rights Under the Law in recognition of her equity-driven leadership to help guide and protect marginalized communities.

Keisha is the daughter of R&B icon Major Lance and Sylvia Robinson. She and her husband, Derek, are parents to four children.