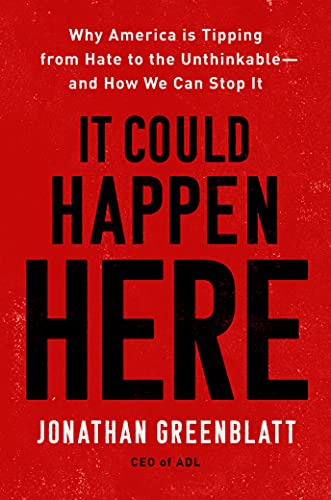 THIS EVENT HAS BEEN POSTPONED UNTIL NOVEMBER.  WE WILL ANNOUNCE THE EXACT DATE SHORTLY.

From the dynamic head of Anti-Defamation League, an impassioned argument about the terrifying path that America finds itself on today—and how we can save ourselves.

The Book Festival of the MJCCA, in partnership with the Anti-Defamation League, Southeast Region and A Cappella Books, presents Jonathan Greenblatt, author of “It Could Happen Here: Why America is Tipping from Hate to the Unthinkable--and How We Can Stop It,” on Tuesday, May 24, at 7:30 PM.

Tickets are $15 for MJCCA members and $20 for non-members, or you may purchase a ticket bundle, which includes a hardcover copy of “It Could Happen Here” for $36. A Cappella will have copies of the book for purchase at the venue.

It’s almost impossible to imagine that unbridled hate and systematic violence could come for us or our families. But it has happened in our lifetimes in Europe, the Middle East, Africa, and Asia. And it could happen here.

Today, as CEO of the storied ADL (the Anti-Defamation League), Jonathan Greenblatt has made it his personal mission to demonstrate how antisemitism, racism, and other insidious forms of intolerance can destroy a society, taking root as quiet prejudices but mutating over time into horrific acts of brutality. In this urgent book, Greenblatt sounds an alarm, warning that this age-old trend is gathering momentum in the United States—and that violence on an even larger, more catastrophic scale could be just around the corner.

But it doesn’t have to be this way. Drawing on ADL’s decades of experience in fighting hate through investigative research, education programs, and legislative victories as well as his own personal story and his background in business and government, Greenblatt offers a bracing primer on how we—as individuals, as organizations, and as a society—can strike back against hate. Just because it could happen here, he shows, does not mean that the unthinkable is inevitable.

Jonathan Greenblatt is the CEO of ADL (the Anti-Defamation League), the world’s leading anti-hate organization with a distinguished record of fighting antisemitism and advocating for just and fair treatment to all. Jonathan joined ADL in 2015 after serving in the White House as special assistant to President Obama and director of the Office of Social Innovation and Civic Participation. He joined the government after a distinguished career in business as a successful social entrepreneur and corporate executive: he cofounded Ethos Brands, the company that launched Ethos Water (acquired by Starbucks, 2005), founded All for Good (acquired by Points of Light, 2011), and served as a senior executive at realtor.com (acquired by News Corp, 2014).