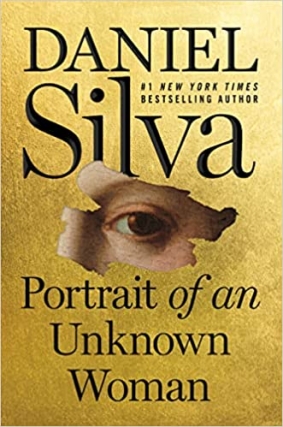 The Marcus Jewish Community Center of Atlanta welcomes the Silva for the festival’s Patron kick-off event. The author will appear in conversation with Nadia Bilchik, CNN editorial producer, author, and speaker.

Tickets include a hardcover copy of “Portrait of an Unknown Woman.”

A gripping story of deception in the world of international fine art.

Restorer and spy Gabriel Allon embarks on a dangerous hunt across Europe for the secret behind the forgery of a 17th-century masterpiece that has fooled experts and exchanged hands for millions.

Stylish, sophisticated, and ingeniously plotted, “Portrait of an Unknown Woman” is a wildly entertaining journey through the dirty side of the art world—a place where unscrupulous dealers routinely deceive their customers, and deep-pocketed investors treat great paintings as though they were just another asset class to be bought and sold at a profit. From its elegant opening passage to the shocking twists of its climax, the novel is a tour de force of storytelling and among the finest pieces of heist fiction ever written. And it is still more proof that, when it comes to international intrigue and suspense, Daniel Silva has no equal.

Daniel Silva is the award-winning, #1  New York Times bestselling author of “The Unlikely Spy,” “The Mark of the Assassin,” “The Marching Season,” “The Defector,” “The Rembrandt Affair,” “The English Girl,” “The Heist,” “House of Spies,” “The New Girl,” and “The Order.”  He is best known for his long-running thriller series starring spy and art restorer Gabriel Allon. Silva’s books are critically acclaimed bestsellers around the world and have been translated into more than 30 languages. He resides in Florida with his wife, television journalist Jamie Gangel, and their twins, Lily and Nicholas.