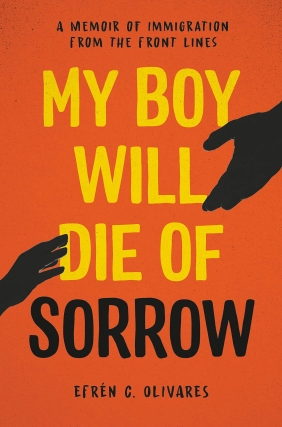 This deeply personal perspective from a human rights lawyer—whose work on the front lines of the fight against family separations in South Texas intertwines with his own story of immigrating to the United States at thirteen—reframes the United States' history as a nation of immigrants but also a nation against immigrants.

The Jimmy Carter Presidential Library and A Cappella Books welcome author and Deputy Legal Director of the Immigrant Justice Project at Southern Poverty Law Center Efrén C. Olivares to The Carter Center for a discussion on his new book, “My Boy Will Die of Sorrow: A Memoir of Immigration From the Front Lines” on Wednesday July 27, 2022, at 7 PM. The author will appear in conversation with Laura Rivera, director of SPLC's Southeast Immigrant Freedom Initiative (SIFI).

In the summer of 2018, Efrén C. Olivares found himself representing hundreds of immigrant families when Zero Tolerance separated thousands of children from their parents at the U.S.-Mexico border. Twenty-five years earlier, he had been separated from his own father for several years when he migrated to the U.S. to work. Their family was eventually reunited in Texas, where Efrén and his brother went to high school and learned a new language and culture.

By sharing these gripping family separation stories alongside his own, Olivares gives voice to immigrants who have been punished and silenced for seeking safety and opportunity. Through him we meet Mario and his daughter Oralia, Viviana and her son Sandro, Patricia and her son Alessandro, and many others. We see how the principles that ostensibly bind the U.S. together fall apart at its borders.

“My Boy Will Die of Sorrow” reflects on the immigrant experience then and now, on what separations do to families, and how the act of separation itself adds another layer to the immigrant identity. Our concern for fellow human beings who live at the margins of our society—at the border, literally and figuratively—is shaped by how we view ourselves in relation both to our fellow citizens and to immigrants. He discusses not only law and immigration policy in accessible terms, but also makes the case for how this hostility is nothing new: children were put in cages when coming through Ellis Island, and Japanese Americans were forcibly separated from their families and interned during WWII. By examining his personal story and the stories of the families he represents side by side, Olivares meaningfully engages readers with their assumptions about what nationhood means in America and challenges us to question our own empathy and compassion.

Efrén C. Olivares is the Deputy Legal Director of the Immigrant Justice Project at Southern Poverty Law Center. He was the lead lawyer in a successful landmark petition to the Inter-American Commission on Human Rights on behalf of families separated under the Zero Tolerance policy. He previously directed the Racial and Economic Justice Program at the Texas Civil Rights Project. His writings on immigration policy have also been published by the New York Times, USA Today, and Newsweek, and he has testified before Congress and at briefings on Capitol Hill about immigration and border policies. Part of his work representing separated families was featured in the CBS News documentary “The Faces of Family Separation,” released in October 2019. He has also been interviewed as an expert attorney on immigrants’ rights issues on numerous TV and radio shows, and was featured in John Legend’s “Can’t Just Preach” series.

Olivares was the first member of his family to attend college. He is a graduate of the University of Pennsylvania and Yale Law School.

For the past decade, Laura has worked in partnership with immigrant and BIPOC communities in the South to advance and defend their legal and human rights. She has contributed to the movement to end the detention of immigrants by litigating class action cases against government agencies and directing a program that provides direct representation to detained immigrants in removal proceedings, the Southeast Immigrant Freedom Initiative of the Southern Poverty Law Center. She has also represented farmworkers in wage theft and trafficking cases as part of the Farmworker Division of the Georgia Legal Services Program.  Laura is committed to practicing community lawyering, centering directly impacted people in her work, and building coalitions. Previously, Laura worked as a journalist in New York and Puerto Rico. Laura is a proud native of Puerto Rico and is fluent in Spanish. She lives in Decatur with her wife and dogs and enjoys spending time with her family, hiking, and cooking.