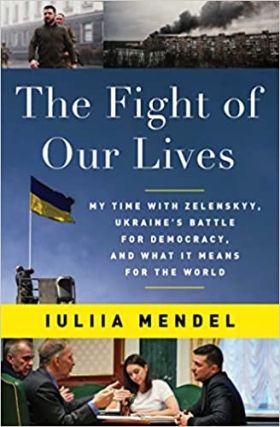 When Ukrainian journalist Iuliia Mendel got the call that she had been hired to work for President Volodymyr Zelenskyy, she had no idea what was to come.

The Marcus Jewish Community Center of Atlanta welcomes the author and former press secretary for the Zelensky administration to discuss her book, "The Fight of Our Lives: My Time with Zelenskyy, Ukraine's Battle for Democracy, and What It Means for the World." Mendel will appear in conversation with Bill Nigut, Senior Executive Producer, Georgia Public Broadcasting and host of "Political Rewind."

Tickets are $15 for MJCCA members and $20 for non-members, or you may purchase a ticket bundle, which includes a hardcover copy of "The Fight of Our Lives" for $33. A Cappella will have copies of the book for purchase at the venue.

Presented in partnership with the Jewish Federation of Greater Atlanta and the American Jewish Committee, Atlanta. Masks are optional.

In this frank and moving inside account, Zelenskyy's former press secretary tells the story of his improbable rise from popular comedian to the president of Ukraine. Mendel had a front-row seat to many key events preceding the 2022 Russian invasion. From attending meetings between Zelenskyy and Putin and other European leaders, visiting the front lines in Donbas, to fielding press inquiries after the infamous phone calls between Donald Trump and Zelenskyy that led to Trump's first impeachment.

Mendel saw firsthand Zelenskyy's efforts to transform his country from a poor, backward Soviet state into a vibrant, prosperous European democracy. Mendel sheds light on the massive economic problems facing Ukraine and the entrenched corrupt oligarchs in league with Russia. She witnessed the Kremlin's repeated attacks to discredit Zelenskyy through disinformation and an army of bots and trolls.

Woven into her account are details about her own life as a member of Zelenskyy's new Ukraine. Written with the sound of Russian bombs and exploding shells in the background, Mendel details life lived under Russian siege in 2022. She says goodbye to her fiancé who joins the front lines, like so many other Ukrainian men. Throughout this story of Zelenskyy, Ukraine, and its extraordinary people, Iuliia Mendel reminds us of the paramount importance of truth and human values, especially in these darkest of times.

Iuliia Mendel is a Ukrainian journalist who served as press secretary and spokesperson for Volodymyr Zelenskyy, President of Ukraine, from 2019 until 2021. Mendel has more than fourteen years of journalism experience on TV and in print media, and her writing has appeared in The New York Times, The Washington Post, VICE, Politico Europe, and many more. "The Fight of Our Lives" is her first book.