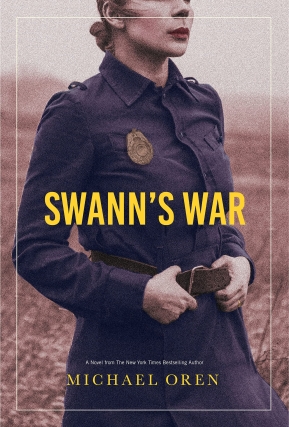 Tickets are $17 for MJCCA members and $22 for non-members. A Cappella will have copies of "Swann’s War" for purchase at the venue.

This program is sponsored by the Consulate General to the Southeastern United States. Masks are optional.

Former Israeli Ambassador to the United States, historian, and bestselling author, Michael Oren, returns to the book festival stage with a thrilling literary fiction debut that is a whodunit for fans for Delia Owens and Jacqueline Winspear.

World War II is raging overseas, but life remains painfully quiet on the rugged New England fishing island of Fourth Cliff. With most of its able-bodied male inhabitants away in the service, the island is now home only to aged fishermen, concerned women and children, and second-rate soldiers guarding a low-priority military emplacement and camp for Italian POWs.

With her husband Archie, Fourth Cliff’s beloved police captain, off fighting in the Marines, Mary Beth Swann steps into his role. Though a cop herself, she has to fight for the respect of Fourth Cliff’s hardscrabble residents. And that’s before a murdered POW surfaces in a fisherman’s net, followed by more bodies. Determined to find the killer, Swann must rely only on the help of a simple-minded deputy, a disgraced doctor, and a mob-connected mainlander to prove her worth to Fourth Cliff—and to herself.

Michael Oren is an internationally renowned author with three New York Times bestsellers. His true passion lies in fiction writing, including recent releases “The Night Archer” and “To All Who Call in Truth.”