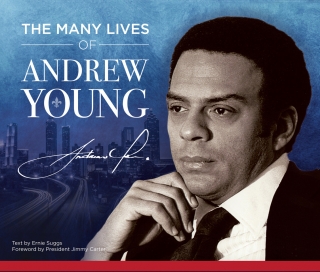 From his childhood in New Orleans to Howard University as a boy of fifteen, from his work as a young pastor in Alabama to his leadership role in the SCLC, from serving as the first Black congressman from Georgia since Reconstruction to serving as the Ambassador to the United Nations, from two transformational terms as mayor of Atlanta to co-chairmanship of the 1996 Summer Olympics Games, from co-founding Good Works International to promoting human rights across the globe with the Andrew Young Foundation, author Ernie Suggs tells the inspiring, dramatic story of civil rights hero, congressman, ambassador, mayor, and American icon Andrew Young.

The 31st Edition of the Book Festival of the MJCCA proudly welcomes Atlanta Journal-Constitution journalist Ernie Suggs and the Honorable Andrew Young for an intimate conversation of Suggs' new biography, "The Many Lives of Andrew Young."

Tickets are $20 for MJCCA members and $27 for non-members. A Cappella will have copies of the book for purchase at the venue. Masks are optional.

Featuring hundreds of full-color photographs that capture the extraordinary life and times of Andrew Young and a captivating narrative by acclaimed Atlanta Journal-Constitution race reporter Ernie Suggs, filled with personal accounts from Andrew Young himself, "The Many Lives of Andrew Young" is both a tribute to and an essential chronicle of the life of a man whose activism and service changed the face of America and whose work continues to reverberate around the world today.

Ernie Suggs has been a reporter at the Atlanta Journal-Constitution since 1997, currently covering race and culture. At the AJC, he is also the publisher of the paper's weekly, Black-oriented newsletter, "Unapologetically ATL."

Suggs earned his B.A. degree in English Literature from North Carolina Central University in 1990, where he was the editor in chief and sports editor of The Campus Echo.

Upon graduation, he was awarded an internship by the National Association of Black Journalists (NABJ) to work for Gannett Newspapers. He returned to Durham, North Carolina in 1992 as a writer for The Herald-Sun. In 1996, Suggs was awarded a fellowship by the Education Writers Association, which culminated in his award-winning, Pulitzer-nominated series “Fighting to Survive: Historically Black Colleges and Universities Face the 21st Century.” He was hired as a reporter at the Atlanta Journal-Constitution in 1997. In 2005, Suggs became the Vice President of the NABJ. He was chosen for the prestigious Nieman Fellowship at Harvard University in 2008, and in 2009, he joined the Nieman Foundation's board. Suggs received the Pioneer Black Journalist Award from NABJ in 2013. His appreciation for Prince and The New York Yankees is unmatched.