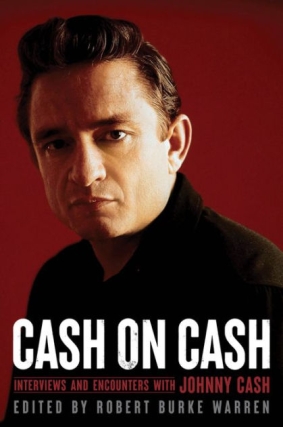 In “Cash on Cash,” Warren has collected Cash’s own words, from successive stages of a legendary career, to reveal the generous and life-embracing spirit that drove the Man in Black. His unfiltered thoughts and insights—with Warren’s insightful framing of each entry—present a complete biographical sweep of a life well lived, an arc of personal growth and spiritual self-discovery that makes this book surprisingly deeper and far more valuable than a mere collection of interviews." —Ashley Kahn, Grammy-winning music historian

A Cappella Books and 378 Gallery are thrilled welcome writer and musician Robert Burke Warren to celebrate the release of his new book, “Cash on Cash: Interviews and Encounters with Johnny Cash.” Burke perform a short musical set followed by a conversation with Atlanta artist and writer Clare Butler.

This event is free and open to the public.  Copies of “Cash on Cash” will be available for purchase at the gallery. The author will sign books after the program.

“Cash on Cash” offers unprecedented insight into one of the most significant American cultural figures of the twentieth century.

As an interviewee, Cash was an exemplary communicator to an astonishingly broad spectrum of people: always open and articulate, part friend, part spiritual authority, part flawed hero. Throughout a decades-long career, as Cash took risks, embracing new technologies, formats, and attitudes, he cleaved to a simple, core message of unvarnished truth.

A comprehensive collection of Johnny Cash interviews and feature stories, some widely published and others never previously transcribed, culled from the 1950s through the early days of the new millennium, “Cash on Cash” charts a singular evolution. From hardscrabble Arkansas poor boy to rockabilly roustabout; international fame to drug addiction and disgrace; born again Christian to gimlet-eyed chronicler of spiritual darkness; TV and movie star to Nashville reject; redemption to loss and back again, several times.

Cash’s story, told in his own words, shines unfiltered light on a journey of archetypal proportions that resonates still.

Robert Burke Warren is a published novelist, musician, educator, and journalist based in the Catskill Mountains of New York. He is the author of the novel “Perfectly Broken” and one-man show “Redheaded Friend.” You can find his music on albums by RuPaul, Rosanne Cash, and rockabilly queen Wanda Jackson; The Roots used his tune "The Elephant In the Room" as John McCain's entrance theme on “Late Night with Jimmy Fallon.” In the 90s, he performed the lead in the West End musical “Buddy: The Buddy Holly Story.” His music writing has been published in Vulture, Paste, Salon, the Woodstock Times, Longreads, the Rumpus, the Rock & Roll Hall of Fame’s publications, and the 2006 Da Capo Press anthology “The Show I’ll Never Forget.”

Clare Butler is an Atlanta based writer, curator, textile artist and voiceover actor. For more than three decades, she built a career as a professional speechwriter and writer. She was previously a musician with Now Explosion, Ratchet Set and Big Sissy and a performance artist, actor and comedian with “The American Music Show.” She pursued a degree in fine art, but ultimately earned a Bachelor of Science degree in Geology from Georgia State University. Currently, she creates embroidered portraits through her “Modern Day Saints” series, curates art exhibitions, works as a freelance writer and relishes the excitement of a good game of cards.