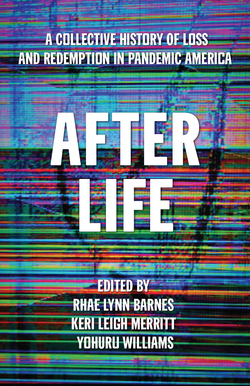 "Sometimes, you don’t know what you really need until you read it. In “After Life,” some of America’s most searching minds sift through the wreckage of the pandemic to provide us precious shards of light, so that the unfathomable loss of life—more than all the Americans who died in the Civil War or in World War II—will not be in vain." —Nancy MacLean, author of “Democracy in Chains”

A Cappella Books welcomes Atlanta-based historian, writer, and editor Keri Leigh Merritt to Manuel’s Tavern on Wednesday, January 25, 2023, at 7 PM. Merritt will discuss the acclaimed compilation of essays she contributed to and co-edited, “After Life: A Collective History of Loss and Redemption in Pandemic America,” with Doug Blackmon, Pulitzer-Prize winning author of “Slavery by Another Name.”

This event is free and open to the public, and copies of the book will be available for purchase.

“After Life” is a collective history of how Americans experienced, navigated, commemorated, and ignored mass death and loss during the global COVID-19 pandemic, mass uprisings for racial justice, and the near presidential coup in 2021 following the 2020 election. Inspired by the writers who documented American life during the Great Depression and World War II for the Works Progress Administration (WPA), the editors asked twenty-first-century historians and legal experts to focus on the parallels, convergences, and differences between the exceptional "long 2020", while it unfolds, and earlier eras in U.S. History.

Providing context for the entire volume, “After Life’s” introduction explains how COVID-19 and America's long history of inequality, combined with a corrupt and unconcerned federal government, produced one of the darkest times in our nation’s history. Discussing the rise of the COVID-19 death toll in the United States, eventually exceeding the 1918 flu, the AIDS epidemic, and the Civil War, it ties public health, immigration, white supremacy, elections history, and epidemics together, and provides a short history of the Black Lives Matter protests of 2020 and the beginnings of a Third Reconstruction.

“After Life” documents how Americans have dealt with grief, pain, and loss, both individually and communally, and how we endure and thrive. The title is an affirmation that even in our suspended half-living during lockdowns and quarantines, we are a nation of survivors—with an unprecedented chance to rebuild society in a more equitable way.

Keri Leigh Merritt is a historian, writer, and activist based in Atlanta, Georgia. She is the author of “Masterless Men: Poor Whites and Slavery in the Antebellum Sout” and the co-editor of “Reconsidering Southern Labor History: Race, Class, and Power.”

Douglas A. Blackmon is the Pulitzer-Prize winning author of “Slavery by Another Name: The Re-Enslavement of Black Americans from the Civil War to World War II,” and co-executive producer of the acclaimed PBS documentary of the same name. His is also a contributing correspondent to the Washington Post and chair and host of “Forum,” a public affairs program produced by the University of Virginia’s Miller Center and aired on more than 100 PBS affiliates across the U.S.