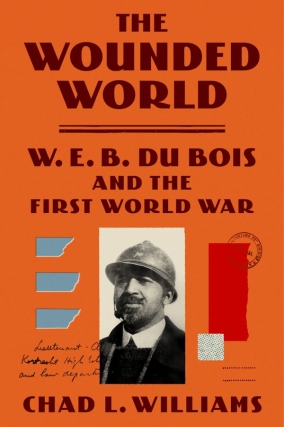 The dramatic story of W. E. B. Du Bois's reckoning with the betrayal of Black soldiers during World War I—and a new understanding of one of the great twentieth-century writers.

The Jimmy Carter Presidential Library and A Cappella Books welcome award-winning author and Brandeis University Professor of History and African and African American Studies Chad L. Williams for a discussion of his new book, “The Wounded World: W. E. B. Du Bois and the First World War.” Williams will appear in conversation with Carol Anderson, Professor of African American Studies at Emory University and author of the National Book Award-nominated “One Person, No Vote.”

When W. E. B. Du Bois, believing in the possibility of full citizenship and democratic change, encouraged African Americans to “close ranks” and support the Allied cause in World War I, he made a decision that would haunt him for the rest of his life. Seeking both intellectual clarity and personal atonement, for more than two decades Du Bois attempted to write the definitive history of Black participation in World War I. His book, however, remained unfinished. In The Wounded World, Chad Williams offers the dramatic account of Du Bois’s failed efforts to complete what would have been one of his most significant works. The surprising story of this unpublished book offers new insight into Du Bois’s struggles to reckon with both the history and the troubling memory of the war, along with the broader meanings of race and democracy for Black people in the twentieth century.

Drawing on a broad range of sources, most notably Du Bois’s unpublished manuscript and research materials, Williams tells a sweeping story of hope, betrayal, disillusionment, and transformation, setting into motion a fresh understanding of the life and mind of arguably the most significant scholar-activist in African American history. In uncovering what happened to Du Bois’s largely forgotten book, Williams offers a captivating reminder of the importance of World War I, why it mattered to Du Bois, and why it continues to matter today.

Chad L. Williams is the Samuel J. and Augusta Spector Professor of History and African and African American Studies at Brandeis University. He is the author of the award-winning book “Torchbearers of Democracy: African American Soldiers in the World War I Era” and the coeditor of “Charleston Syllabus: Readings on Race, Racism, and Racial Violence.” His writings and op-eds have appeared in The Atlantic, The Washington Post, Time, and The Conversation. He lives in Needham, Massachusetts.

Carol Anderson is the Charles Howard Candler Professor of African American Studies at Emory University and author of “White Rage: The Unspoken Truth of Our Racial Divide,” a New York Times Bestseller, Washington Post Notable Book of 2016, and a National Book Critics Circle Award winner. She is also the author of “Eyes Off the Prize: The United Nations and the African American Struggle for Human Rights, 1944-1955,” “Bourgeois Radicals: The NAACP and the Struggle for Colonial Liberation, 1941-1960,” and “One Person, No Vote: How Voter Suppression is Destroying Our Democracy,” which was long-listed for the National Book Award and a finalist for the PEN/Galbraith Award in non-fiction.