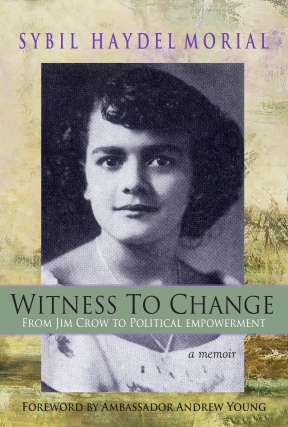 In 1950s New Orleans, a young woman steps into her white tulle gown and glides down the long hallway of her parents’ house into the front garden. Her father, a respected surgeon, drives her downtown, where she will make her debut into Negro society.

Though mesmerized by the rituals, Sybil Haydel, 17, cannot help but note their irony in a world where she daily faces the barriers and insults of Jim Crow.

Thirteen years later, Sybil lies sleepless in bed next to her husband, Dutch Morial. Medgar Evers, the NAACP’s national leader, has just been murdered in Mississippi. Dutch, the organization’s New Orleans’ president, has just received another chilling death threat. In halting whispers, the couple discusses how to protect their three young children.

The Morials first become legal, then political, activists. Testing Brown v Board of Education, Sybil attempts to enroll at Tulane and Loyola. She and Dutch challenge a statute restricting political activities of public school teachers. Barred from the League of Women Voters, Sybil forms an organization to help register Negroes held back from voting. After serving as judge and Louisiana legislator, Dutch is elected New Orleans’ first black mayor.

Sybil’s memoir reveals a woman whose intelligence overrides the clichés of racial division. In its pages, we catch rare glimpses of black professionals in an earlier New Orleans, when races, though socially isolated, lived side by side; when social connections helped to circumvent Jim Crow; when African-American culture forged New Orleans—and American—identity.

Through loving eyes, Sybil traces the rise of her sons and daughters: After Dutch’s death, Marc Morial served two terms as New Orleans mayor. Sybil’s other children—a physician, a public policy strategist, a community development director, and a judge—lead and serve their communities before, and after, Hurricane Katrina’s devastation.

Ambassador Andrew Young notes: It is doubtful that New Orleans could have produced two mayors with the dynamic, creative, and visionary leadership of ‘Dutch’ and Marc without a wife and mother of Sybil’s loving strength, intelligence, and moral courage. But the life she lived in the crucible times, and her perception of the civil rights movement in New Orleans, goes far beyond that.

On Thursday, March 27, 2017 at 7PM, Sybil Morial will appear at The Carter Library to read, discuss, and answer questions about her latest work. A Cappella Books is the official bookseller for this event.