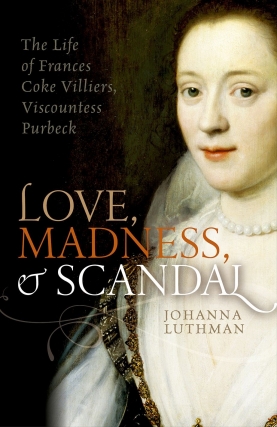 The high society of Stuart, England found Frances Coke Villiers, Viscountess Purbeck (1602-1645) an exasperating woman. She lived at a time when women were expected to be obedient, silent, and chaste, but Frances displayed none of these qualities. Her determination to ignore convention contributed in no small measure to a life of high drama, one which encompassed kidnappings, secret rendezvous, an illegitimate child, accusations of black magic, imprisonments, disappearances, and exile, not to mention court appearances, high-speed chases, a jail-break, deadly disease, royal fury, and - by turns - religious condemnation and conversion.

As a child, Frances became a political pawn at the court of King James I. Her wealthy parents, themselves trapped in a disastrous marriage, fought tooth and nail over whom Frances should marry, pulling both king and court into their extended battles. When Frances was fifteen, her father forced her to marry John Villiers, the elder brother of the royal favorite, the Duke of Buckingham. But as her husband succumbed to mental illness, Frances fell for another man, and soon found herself pregnant with her lover's child.

The Viscountess paid a heavy price for her illicit love. Her outraged in-laws used their influence to bring her down. But bravely defying both social and religious convention, Frances refused to bow to the combined authority of her family, her church, or her king, and fought stubbornly to defend her honour, as well as the position of her illegitimate son.

On one level a thrilling tale of love and sex, kidnapping and elopement, the life of Frances Coke Villiers is also the story of an exceptional woman, whose personal experiences intertwined with the court politics and religious disputes of a tumultuous and crucially formative period in English history.

ABOUT THE EVENT
On Monday, August 7 at 7:15PM, Johanna Luthman will appear at Decatur Library to discuss, read, and sign copies of Love Madness, and Scandal: The Life of Frances Coke Villiers, Viscountess Purbeck.