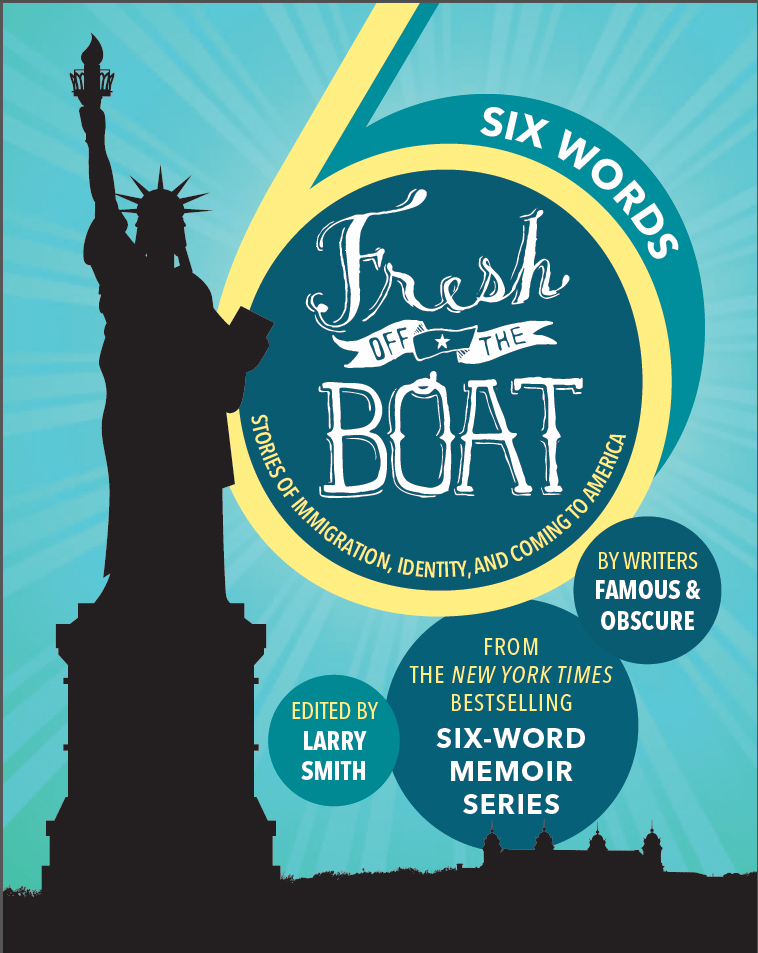 Hear the powerful "backstories" from notable Atlanta contributors to Six Words Fresh Off the Boat, the newest collection from Larry Smith's popular Six-Word Memoir series. This one focuses on stories of immigration, identity, and coming to America. It could not be more timely.

In Six Words Fresh Off the Boat, Larry Smith—founder of SixWordMemoirs.com and its bestselling book series—and the creators of the ABC's Fresh Off the Boat, explore stories of immigration, identity, and coming to America. These dynamic stories of survival, struggle and success will give you pause, make you laugh, and renew your hope for our great nation. Crowdsourced from recent immigrants, refugees, and families who have been here for generations, this powerful collection includes President Jimmy Carter, Secretary Madeleine Albright, Junot Diaz, Chimamanda Ngozi Adichie, Mila Kunis, Aziz Ansari, and more. Atlanta-area contributors will share their backstories including Clarkston Mayor Ted Terry, Dr. Gulshan Harjee, and Senator Jason Carter will share President Carter's six words. The evening will close with a dynamic “Six-Word Slam” when the audience is invited to share their own Six-Word Memoirs.

Larry Smith is the founder and editor of SMITH Magazine, best known for launching the Six-Word Memoir® project. Six Words is a bestselling books series, live events program, board game, and form of self-expression employed to spark self-expression and hone missions in classrooms, boardrooms and corporate retreats. Anticipating the microblogging explosion, SMITH Mag originally launched the Six-Word Memoir project in November 2006 in partnership with Twitter with a simple online challenge asking: “Can you tell your life story in six words?” Now more than 1 million Six-Word Memoirs have been shared across SixWordMemoirs.com, mobile and social media. Larry’s latest launch is the civic engagement initiative, Six in the City, currently debuting in Columbus, Ohio, where he lives with his wife, writer Piper Kerman.

ABOUT "SIX WORDS FRESH OFF THE BOAT"

Six Words Fresh Off the Boat marries the phenomenon of Larry Smith's successful Six-Word Memoirs with ABC and 20th Century Fox Television's hit comedy Fresh Off the Boat. The book captures hundreds of takes on the immigration experience, from every-day people as well as world-famous celebrities including Aziz Ansari, Chimamanda Ngozi Adichie, Julianne Moore, Mario Batali, George Takei, Neil Gaiman, Amanda Palmer, Billy Collins, Junot Diaz, and Dr. Sanjay Gupta. This book will have you thinking in sixes and challenging others to share six words about their lives.

This timely and unique crowd-sourced book of immigration stories — each told in six words —  captures hundreds of memoirs on the experience from across America, spanning cultures and generations, to paint a powerful portrait of who we are as a country, and where we came from.

Contributors include refugees ("Refugee went from burkas to bachelors,"); students (“I only speak Spanish on weekends,”); armed forces personnel (“Salvadoran immigrant raises US Navy diver,”); an astronaut (“From farm worker to NASA astronaut”); an Olympiad ("Albanian Olympiad flees for America: reborn"); and a Teen Jeopardy winner ("Land of opportunity lets me learn").