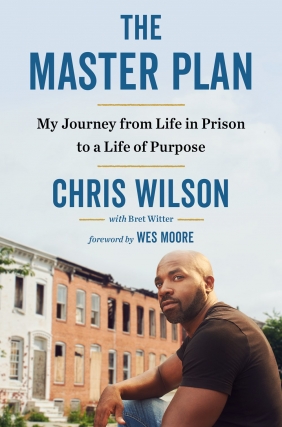 Co-written with Decatur's Bret Witter, "The Master Plan: My Journey from Life in Prison to a Life of Purpose" is Chris Wilson's inspiring, instructive, and ultimately triumphant memoir. It's the story of a man who used hard work and a Master Plan to turn a life sentence into a second chance.

Growing up in a tough Washington, D.C., neighborhood, Chris Wilson was so afraid for his life he wouldn’t leave the house without a gun. One night, defending himself, he killed a man. At 18, he was sentenced to life in prison with no hope of parole.

But what should have been the end of his story became the beginning. Deciding to make something of his life, Wilson embarked on a journey of self-improvement—reading, working out, learning languages, even starting a business. He wrote his Master Plan: a list of all he expected to accomplish or acquire. He worked his plan every day for years, and in his mid-thirties he did the impossible: he convinced a judge to reduce his sentence and became a free man. Today Wilson is a successful social entrepreneur who employs returning citizens; a mentor; and a public speaker. He is the embodiment of second chances, and this is his unforgettable story.

Chris Wilson lives in Baltimore, Maryland, and is the owner and founder of the Barclay Investment Corporation, a multi-service social enterprise, specializing in residential and commercial contracting work. Barclay works closely with local workforce and social service providers to connect unemployed Baltimore City residents with clients who are in need of services. His other business ventures include the House of DaVinci, a high-end furniture restoration and design company, and Master Plan Productions, a social impact content development company.

Please note that the nonprofit, non-governmental Carter Center has agreed to take over as the host of Carter Library's author series during the federal government shutdown. Previously scheduled events will move to either the Cecil B. Day Chapel or the Cyprus Room at the Carter Center. Event signs and Carter Center volunteers will be on hand to direct attendees.