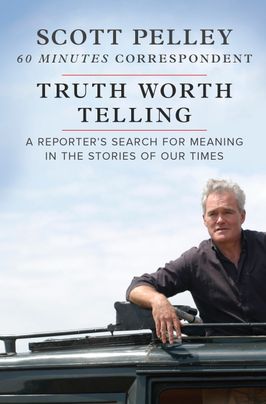 A Cappella Books and The Carter Center welcome multi-awarding-winning journalist and CBS "60 Minutes" correspondent Scott Pelley, who will discuss and sign copies of his new book, "Truth Worth Telling: A Reporter's Search for Meaning in the Stories of Our Times."

All members of our A Cappella Choir are invited, along with a guest, to our meet & greet with Scott Pelley at Manuel's Tavern from 5:30-6:30 PM. Also, you will enjoy preferred seating at the Carter Center event.

Not a member? If you join the A Cappella Choir, at any level, between now and May 23, you and a guest are invited to attend this reception. Members will have a chance to meet Scott Pelley, have their copy of “Truth Worth Telling" signed and personalized, and take a photo with the him ahead of the book discussion at 7 p.m. "Truth Worth Telling" will be the first purchase out of your new Choir account, and we will have your book at the reception.

In "Truth Worth Telling," Scott Pelley reflects on his life as a journalist of the highest order, recounting incredible stories of the people and places he's encountered over a 30-year career. In moving, detailed prose, he recalls such indelible moments as running south towards the World Trade Center on 9/11 to report from the scene, reveals private moments with presidents (and would-be presidents) who he's known for decades, and chronicles hair-raising risks he's made to report from the frontlines of America's wars abroad.

Throughout it all Pelley has learned to identify the values that separate the people whose lives make a difference in the moments that count and the flaws that bring down even the most powerful. Those core strengths and weaknesses serve as an inspiration for tackling the challenges, big and small, in our own lives, and in the process help us to define our own life's meaning.

Scott Pelley, one of the most experienced and awarded correspondents in broadcast journalism, has been reporting stories for "60 Minutes" since 2004. He served as anchor of the "CBS Evening News" from 2011 to 2017. His stories for "60 Minutes" have accounted for half of all the major awards won by the broadcast since he joined it. He has won a record 35 Emmys for field work, and also has been recognized with five Edward R. Murrow awards, three George Foster Peabody awards, three Alfred I. duPont-Columbia Silver Batons, a George Polk award, as well as honors from the Society of Professional Journalists, the Overseas Press Club of America, Investigative Reporters and Editors and the Writers Guild of America. Pelley serves on the board of directors of the International Rescue Committee, the refugee relief agency headquartered in New York City. He is co-chair of the IRC's Board of Overseers. He was inducted into the Texas Tech University Alumni Hall of Fame and serves on the board of the university's School of Mass Communications.