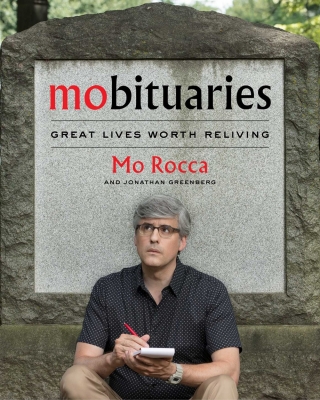 Popular TV correspondent, writer, and podcaster Mo Rocca brings us "Mobituaries," a charmingly irreverent and rigorously researched book that celebrates the dead people who made life worth living.

Rocca will appear in conversation with Alison Law, host of the "Literary Atlanta" podcast.

Couples or friends who are attending this event together should purchase an ADMIT 1 TICKET if each person would like to receive a copy of "Mobituaries."

Seating is general admission at The Carter Center.

Skip the fees and purchase your tickets at A Cappella Books.

Mo Rocca has always loved obituaries—reading about the remarkable lives of world leaders, captains of industry, innovators and artists. But not every notable life has gotten the send-off it deserves. With "Mobituaries"—the book companion to the CBS podcast of the same name—the journalist, humorist, and history buff is righting that wrong, profiling the people who have long fascinated him—from the 20th century’s greatest entertainer...to sitcom characters gone all too soon…to a shamefully forgotten Founding Father. Even if you know the names, you’ve never understood why they matter…until now.

In these pages, Rocca chronicles the stories of the people who made a difference, but whose lives—for some reason or another—were never truly examined. There’s Thomas Paine, whose "Common Sense" lit the fuse for the American Revolution—and whose paltry obit summed up his life thusly: “He had lived long, did some good, and much harm.” And then there’s screen icon Audrey Hepburn. She remains a household name, but how much do we know about her wartime upbringing and how it shaped the woman we fell in love with? And what about Billy Carter and history’s unruly presidential brothers? Were they ne’er-do-well liabilities…or secret weapons?

As a correspondent for "CBS Sunday Morning" and the host of "The Henry Ford’s Innovation Nation," Rocca is an expert researcher and storyteller. He draws on these skills here. With his rigorous reporting and trademark wit, Rocca brings these men and women splendidly back to life like no one else can. "Mobituaries" is an insightful and unconventional account of the people who made life worth living for the rest of us, one that asks us to think about who gets remembered, and why.

Mo Rocca is a correspondent for "CBS Sunday Morning," host of "The Henry Ford’s Innovation Nation," and host and creator of the Cooking Channel’s "My Grandmother’s Ravioli," in which he learns to cook from grandmothers and grandfathers across the country. He’s also a frequent panelist on NPR’s hit weekly quiz show "Wait, Wait…Don’t Tell Me!" Mo spent four seasons as a correspondent on Comedy Central’s "The Daily Show with Jon Stewart" and four seasons as a correspondent on "The Tonight Show with Jay Leno." Mo Rocca began his career in TV as a writer and producer for the Emmy and Peabody Award-winning PBS children’s series "Wishbone." He went on to write and produce for other kids series, including ABC’s "Pepper Ann" and Nickelodeon’s "The Wubbulous World of Dr. Seuss." Mo is the author of "Mobituaries" and "All the Presidents’ Pets," a historical novel about White House pets and their role in presidential decision-making.