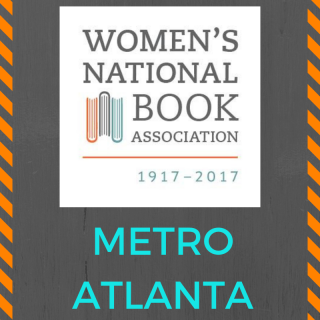 As part of National Reading Group Month, the Metro Atlanta Chapter of the Women's National Book Association (WNBA) is hosting a signature event featuring three terrific Atlanta authors. Jessica Handler, Nita Brooks, and Kathryn Smith will be discussing their books, taking questions, and signing their books at the store. WNBA will be offering refreshments as well as raffles supporting a local charity.

About Nita Brooks and Redesigning Hope

A reading addict, self-professed connoisseur of home improvement shows, and a collector of teapots, Nita Brooks resides in South Carolina with her family.

Her debut novel tells the heartfelt story of a suddenly successful single mother who finds her perfectly-designed, fame-bound life upended by a surprise from the past…

It wasn’t easy for Yvonne Cable to get over a heartbreaking relationship and revamp her life. But now the once-broke single mom is Atlanta’s most sought-after interior designer—and one-half of the media’s hottest power couple. She and her celebrity fiancé, Nathan, are a perfect, practical match, on—and off—camera. And with their new home improvement reality show the object of a fierce network bidding war, there’s no limit to how far they can go…

But Yvonne is stunned when mogul Richard Barrington III unexpectedly makes an offer for their program. He’s the man she thought left her for a more successful woman. And he’s the father of her son—though he didn’t know it until now. Richard wants to get to know their boy, and Yvonne agrees, though she’s wary. Yet little by little, she’s finding it hard to resist the responsible, caring man Richard has become. But when a scandalous leak puts everything Yvonne’s worked for at risk, she’ll have to look beyond surfaces to come to terms with who she is—and discover what she truly wants.

About Jessica Handler and The Magnetic Girl

Jessica Handler is the author of Braving the Fire: A Guide to Writing About Grief and Invisible, Sisters: A Memoir, which was named one of the “Twenty Five Books All Georgians Should Read” and Atlanta magazine’s “Best Memoir of 2009.” Jessica writes essays and nonfiction features that have appeared on NPR, in Tin House, Drunken Boat, Full Grown People, Brevity, Newsweek, The Washington Post, and More Magazine.

For fans of Emma Donoghue and Alexander Chee, The Magnetic Girl is set at a time when the emerging presence of electricity raised suspicions about the other-worldly gospel of Spiritualism, and when women’s desire for political, cultural, and sexual presence electrified the country.

In rural north Georgia two decades after the Civil War, thirteen-year-old Lulu Hurst reaches high into her father’s bookshelf and pulls out an obscure book, The Truth of Mesmeric Influence. Deemed gangly and undesirable, Lulu wants more than a lifetime of caring for her disabled baby brother, Leo, with whom she shares a profound and supernatural mental connection.

Lulu begins to “captivate” her friends and family, controlling their thoughts and actions for brief moments at a time. After Lulu convinces a cousin she conducts electricity with her touch, her father sees a unique opportunity. He grooms his tall and indelicate daughter into an electrifying new woman: "The Magnetic Girl." Lulu travels the Eastern seaboard, captivating enthusiastic crowds by lifting grown men in parlor chairs and throwing them across the stage with her “electrical charge.”

While adjusting to life on the vaudeville stage, Lulu harbors a secret belief that she can use her newfound gifts, as well as her growing notoriety, to heal her brother. As she delves into the mysterious book’s pages, she discovers keys to her father’s past and her own future--but how will she harness its secrets to heal her family?

Gorgeously envisioned, "The Magnetic Girl" is set at a time when the emerging presence of electricity raised suspicions about the other-worldly gospel of Spiritualism, and when women’s desire for political, cultural, and sexual presence electrified the country. Squarely in the realm of Emma Donoghue's "The Wonder" and Leslie Parry’s "Church of Marvels," "The Magnetic Girl" is a unique portrait of a forgotten period in history, seen through the story of one young woman’s power over her family, her community, and ultimately, herself.

Kathryn Smith is a journalist and writer with a life-long interest in FDR and his circle. Her curiosity about Marguerite LeHand arose when she read fleeting mentions of the enigmatic secretary in books about FDR and wondered, “Who was she? What was she like?” Three years and hundreds of hours of research later, she had her answer.

Gertie lived a 20th century life full of fun, adventure, derring-do and drama. Read all about her Gilded Age girlhood, explorations on three continents, hijinks on the French Riviera with the Lost Generation, work for the OSS - the original American spy agency - during World War II, and her imprisonment by the Nazis. And that's less than half the story!

Gertrude Sanford Legendre was a woman whose adventurous life spanned the twentieth century, beginning in Aiken, S.C. in 1902 and ending at her plantation outside Charleston in 2000. She was a daring and fearless woman whose adventures included being the first American woman in uniform held as a POW by the Germans during World War II. She also partied on the Riviera with the Murphys, the Fitzgeralds and Harpo Marx in the 1920s, undertook numerous challenging expeditions for natural history museums (and lead four) and befriended some of the greatest personalities of the 20th century, including Dr. Albert Schweitzer, General George S. Patton, Lilly Pulitzer, and Bing Crosby.

In her later years, she became an ardent conservationist, fighting for habitat preservation on the South Carolina coast and leaving her 7,000-acre plantation in a conservation easement, a place where "the beasts can grow old and die." Gertie is a rollicking read about a woman who was not afraid to say yes to life!