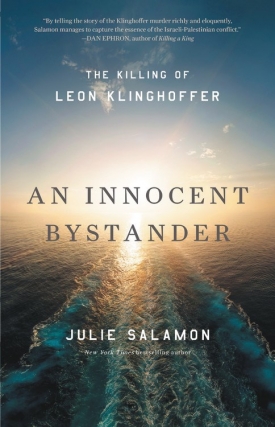 Journalist and author Julie Salamon recounts the moment-by-moment saga of the 1985 hijacking of the Italian luxury liner Achille Lauro and the ensuing U.S.-led international manhunt. Salamon will be in conversation with Gail Evans, former Executive Vice President of CNN and bestselling author, at this 28th Edition of the Book Festival of the MJCCA event.

On October 3, 1985, Leon Klinghoffer, a disabled Jewish New Yorker, and his wife boarded the Achille Lauro to celebrate their 36th wedding anniversary with a Mediterranean cruise. Four days later, four Palestinian fedayeen hijacked the Italian luxury liner and took the passengers and crew hostage. Leon Klinghoffer was shot in the head, his body and wheelchair thrown overboard. His murder became a flashpoint in the intractable struggle between Israelis and Arabs and gave Americans a horrifying preview of what it means when terrorism hits home.

In this richly reported book, drawing on multiple perspectives, Julie Salamon dispels the mythology that has grown around that shattering moment. What transpired on the Achille Lauro left the Klinghoffer family in the grip of irredeemable sorrow, while precipitating tragic reverberations for the wives and sons of Abu al-Abbas, the Palestinian mastermind behind the hijacking, and the family of Alex Odeh, a Palestinian-American murdered in Los Angeles in a brutal act of retaliation.

Through intimate interviews with almost all living participants, including one of the hijackers, Julie Salamon brings alive the moment-by-moment saga of the hijacking and the ensuing U.S.-led international manhunt; the diplomatic wrangling between the United States, Egypt, Italy, and Israel; and the long agonizing search for justice. The book also reveals the back story of the controversial opera about the Klinghoffer tragedy that provoked a culture war.

"An Innocent Bystander" is a masterful work of journalism that moves between the personal and the global with the pace of a geopolitical thriller and the depth of a psychological drama. Throughout lies the tension wrought by terrorism and its repercussions today.

Author and journalist Julie Salamon has written notable nonfiction books about show business, philanthropy, the Holocaust, the insanity defense, and modern medical care. Her ten previous works include several bestsellers and two novels for children. She was a reporter and critic for the Wall Street Journal and the New York Times.