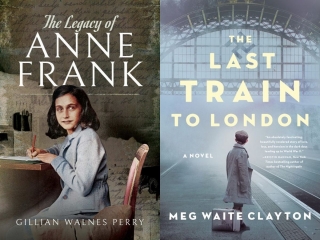 A nonfiction and fiction take on World War II and the Holocaust. Authors Gillian Walnes Perry and Meg Waite Clayton will be in conversation with Sharon Douglas, Chief Executive Officer of The Anne Frank Center for Mutual Respect. This event is part of the 28th Edition of the Book Festival of MJCCA.

About Gillian Walnes Perry and "The Legacy of Anne Frank"

Gillian Walnes Perry co-founded the Anne Frank Trust UK in 1990, along with family and friends of Anne Frank’s father, Otto Frank. In 2010, she was awarded an MBE for her work in education. She has spent time with many people who knew Anne Frank personally, and educators from all over the world who have tirelessly been perpetuating the powerful messages of Anne's life and writing. After 26 years of building the Anne Frank Trust, she retired as the charity’s Executive Director in 2016. She now lectures and writes about the life and legacy of Anne Frank, as well as a range of popular social history topics.

Although many books and literary analyses have been written about Anne Frank’s life and diary, none have explored the surprising influence she has had on young people in countries all over the world, helping to shape their moral framework and giving them critical life skills. This is due in part to the merits of a traveling exhibition created by the Anne Frank House in Amsterdam in 1985, which has so far been seen by over nine million people. The Anne Frank exhibition, along with its innovative educational and cultural activities, has circumnavigated the globe many times.

In this fascinating study, Gillian Walnes Perry explores the various legacies of Anne Frank’s influence. She looks at the complex life of Anne Frank’s father and the motivations that powered his educational philosophy. She shares new insights into the real Anne Frank, personally gifted by those who actually knew her. Global icons such as Nelson Mandela and Audrey Hepburn relate the influence that Anne Frank had on shaping their own lives.

This book presents—all in one place and for the very first time—the inspirational stories of a diverse variety of people from all over the world, brought together by the words of one particularly articulate and inspiring teenage victim of the Holocaust.

About Meg Waite Clayton and "The Last Train to London"

Meg Waite Clayton is a New York Times bestselling author of six novels, including "Beautiful Exiles;" the Langum Prize-honored "The Race for Paris;" "The Language of Light," which was a finalist for the Bellwether Prize for Socially Engaged Fiction (now the PEN/Bellwether); and "The Wednesday Sisters," which was chosen as one of Entertainment Weekly‘s 25 Essential Best Friend Novels of all time. She writes “Listening In,” a monthly audiobook review column for The San Francisco Chronicle, and has written for the Los Angeles Times, the New York Times, the Washington Post, Forbes, and public radio. A graduate of the University of Michigan and its law school, she lives in Palo Alto, California.

The New York Times bestselling author of "Beautiful Exiles" conjures her best novel yet, a pre-World War II-era story with the emotional resonance of "Orphan Train" and "The Nightingale," centering on the Kindertransports that carried thousands of children out of Nazi-occupied Europe—and one brave woman who helped them escape to safety.

In 1936, the Nazis are little more than loud, brutish bores to fifteen-year old Stephan Neuman, the son of a wealthy and influential Jewish family and budding playwright whose playground extends from Vienna’s streets to its intricate underground tunnels. Stephan’s best friend and companion is the brilliant Žofie-Helene, a Christian girl whose mother edits a progressive, anti-Nazi newspaper. But the two adolescents’ carefree innocence is shattered when the Nazis’ take control.

There is hope in the darkness, though. Truus Wijsmuller, a member of the Dutch resistance, risks her life smuggling Jewish children out of Nazi Germany to the nations that will take them. It is a mission that becomes even more dangerous after the Anschluss—Hitler’s annexation of Austria—as, across Europe, countries close their borders to the growing number of refugees desperate to escape.

Tante Truus, as she is known, is determined to save as many children as she can. After Britain passes a measure to take in at-risk child refugees from the German Reich, she dares to approach Adolf Eichmann, the man who would later help devise the “Final Solution to the Jewish Question,” in a race against time to bring children like Stephan, his young brother Walter, and Žofie-Helene on a perilous journey to an uncertain future abroad.