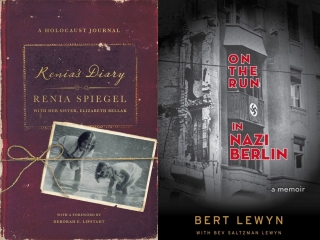 Elizabeth Bellak and Bev Saltzman Lewyn will be in conversation with Dr. Catherine M. Lewis, a professor of history at Kennesaw State University, at this 28th Edition of the Book Festival of the MJCCA event.

Renia Spiegel was born to a Jewish family in Poland in 1924. She began her diary at the start of 1939, right before the invasion of Poland by the German and Soviet armies. In 1942, she was forced to move to a ghetto, but was smuggled out by her boyfriend and went into hiding with his parents. She was discovered by the Gestapo and murdered on July 30, 1942.

Elizabeth Bellak (née Ariana Spiegel), born in 1930, was a child actress once called “the Polish Shirley Temple.” In 1942 she and her mother fled to Warsaw, and then to Austria, finally arriving in New York City, where she lives today.

The long-hidden diary of a young Polish woman's last days during the Holocaust, translated for the first time into English, with a foreword from American Holocaust historian Deborah Lipstadt.

Renia Spiegel was born in 1924 to an upper-middle class Jewish family living in southeastern Poland, near what was at that time the border with Romania. At the start of 1939 Renia began a diary. “I just want a friend. I want somebody to talk to about my everyday worries and joys. Somebody who would feel what I feel, who would believe me, who would never reveal my secrets. A human being can never be such a friend and that’s why I have decided to look for a confidant in the form of a diary.” And so begins an extraordinary document of an adolescent girl’s hopes and dreams. By the fall of 1939, Renia and her younger sister Elizabeth (née Ariana) were staying with their grandparents in Przemysl, a city in the south, just as the German and Soviet armies invaded Poland. Cut off from their mother, who was in Warsaw, Renia and her family were plunged into war.

Like Anne Frank, Renia’s diary became a record of her daily life as the Nazis spread throughout Europe. Renia writes of her mundane school life, her daily drama with best friends, falling in love with her boyfriend Zygmund, as well as the agony of missing her mother, separated by bombs and invading armies. Renia had aspirations to be a writer, and the diary is filled with her poignant and thoughtful poetry. When she was forced into the city’s ghetto with the other Jews, Zygmund is able to smuggle her out to hide with his parents, taking Renia out of the ghetto, but not, ultimately to safety. The diary ends in July 1942, completed by Zygmund, after Renia is murdered by the Gestapo.

"Renia's Diary" has been translated from the original Polish, and includes a preface, afterword, and notes by her surviving sister, Elizabeth Bellak. An extraordinary historical document, Renia Spiegel survives through the beauty of her words and the efforts of those who loved her and preserved her legacy.

About Bev Saltzman Lewyn and "On the Run in Nazi Berlin"

Bert Lewyn (1923–2016) was born Dagobert Lewin in Berlin. He emigrated to the United States in 1949 and settled in Atlanta, Georgia. He Americanized his name and started a family. His daughter-in-law, Bev Saltzman Lewyn, who worked as a researcher for CNN, persuaded him to tell his story; together they made shocking discoveries about his history through assiduous investigation.

Berlin, 1942. The Gestapo arrest eighteen-year-old Bert Lewyn and his parents, sending the latter to their deaths and Bert to work in a factory making guns for the Nazi war effort. Miraculously tipped off the morning the Gestapo round up all the Jews who work in the factories, Bert goes underground. He finds shelter sometimes with compassionate civilians, sometimes with people who find his skills useful and sometimes in the cellars of bombed-out buildings. Without proper identity papers, he survives as a hunted Jew in the flames and terror of Nazi Berlin in part by successfully mimicking non-Jews, even masquerading as an SS officer. But the Gestapo are hot on his trail…

Before World War II, 160,000 Jews lived in Berlin. By 1945, only 3,000 remained alive. Bert was one of the few, and his thrilling memoir—from witnessing the famous 1933 book burning to the aftermath of the war in a displaced persons camp—offers an unparalleled depiction of the life of a runaway Jew caught in the heart of the Nazi empire.