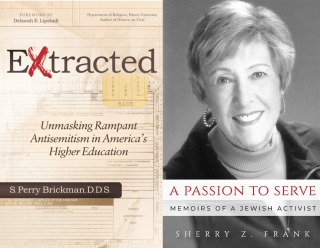 Authors Perry Brickman and Sherry Frank will be in conversation with bestselling author and former Executive Vice President of CNN, Gail Evans, at this 28th Edition of the Book Festival of the MJCCA event.

About Perry Brickman and "Extracted"

Among his many accolades, Dr. S. Perry Brickman was presented the 175th Emory University Maker of History Award for his journalistic excellence in exposing a long history of antisemitism in the Emory University dental school, including his production of a documentary film, "From Silence to Recognition." Brickman practiced oral surgery in the Atlanta area from 1961 to 2005. A native of Chattanooga, he has lived in Atlanta since 1949 and celebrates sixty-three years of marriage with his wife.

For half a century, S. Perry Brickman harbored a deep and personally painful secret…

On a late summer day in 2006, Brickman and his wife attended an exhibit on the history of Jewish life at Emory University and were astonished to come face-to-face with documents that strongly suggested that Brickman and many others had been failed out of Emory’s dental school because they were Jewish. They decided to embark on an uncharted path to uncover the truth. With no initial allies and plenty of resistance, Brickman awoke each morning determined to continue extracting evidence hidden in deep and previously unmined archives. While the overt discrimination was displayed in charts and graphs, the names of the victims were scrupulously withheld.

The ability of the perpetrators to silence all opposition and the willingness of the Jewish community to submit to the establishment were deeply troubling as Brickman continued to dig deeper into the issue. "Extracted" brings to light the human element of the rampant antisemitism that affected the dental profession in twentieth-century America—the personal tragedies, the faces, and the individual stories of shame and humiliation. After five years of identifying, interviewing, and recording the victims, Brickman was finally permitted to present his documentary to Emory officials and ask for redemption for the stain she had made.

About Sherry Frank and "A Passion to Serve"

A community activist for over 50 years, Sherry Frank has worked tirelessly in the Jewish and general communities of Atlanta. She has been an active feminist and a champion for civil and human rights and equality for all.

"A Passion to Serve: Memoirs of a Jewish Activist" tells compelling stories from the career of Sherry Frank. She has partnered with movers and shakers to build bridges of understanding across race and religion. She has been involved in combatting all forms of discrimination, preserving Atlanta's Jewish history, and building support for Israel. In this personal story, she shares her own spiritual journey and expression of her proud Jewish identity.