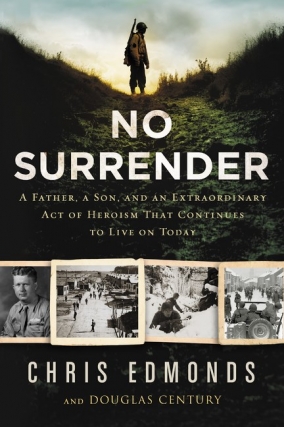 A Tennessee pastor chronicles his journey to discover his father's unforgettable story of valor and service in the Battle of the Bulge. Author Chris Edmonds will be in conversation with former Atlanta Daily World Publisher, Alexis Scott, at this 28th Edition of the Book Festival of the MJCCA event.

Part contemporary detective story, part World War II historical narrative, "No Surrender" is the inspiring true story of Roddie Edmonds, a Knoxville-born enlistee who risked his life during the final days of World War II to save others from murderous Nazis, and the lasting effects his actions had on thousands of lives—then and now.

Captured in the Battle of the Bulge, Master Sergeant Roddie Edmonds was the highest-ranking American soldier at Stalag IXA, a prisoner of war camp near Ziegenhain, Germany. A native of Knoxville, Tennessee, Roddie was a simple, soft-spoken man of deep inner strength and unwavering Christian faith. Though he was driven to the limits of endurance, Roddie refused to succumb to Nazi brutality toward the Jewish-American GIs with whom he was serving. Through his inspiring leadership and bravery Roddie saved the lives of hundreds of U.S. infantrymen in those perilous final days of the Second World War. His fearless actions continue to reverberate today.

Growing up, Pastor Chris Edmonds knew little of his father’s actions in the war. To learn the truth, he followed a trail of clues, a journey that spanned seven decades and linked a sprawling cast of heroes, both known and unknown, from every corner of the country. In "No Surrender," Pastor Chris, joined by New York Times bestselling co-author Douglas Century, chronicles his odyssey to tell the unforgettable story of his father and his remarkable valor. He also provides startling details (and vantage points) of some of the major events of World War II and United States Army initiatives that helped the Allies win the war, including the Battle of the Bulge, the massacre at Malmedy, and the now-little-known Army Specialized Training Program which prepared brilliant young “soldier-scholars”—or “Quiz Kids”—from across the nation to battle the Nazis.

As compelling as the number-one New York Times bestsellers "Unbroken," "Boys on the Boat," "Band of Brothers," and "Schindler’s List," illustrated with photographs and historical documents throughout, "No Surrender" is an epic story of bravery, compassion, and faith, and an inspiring testament to man’s goodness. It is also a clarion call for our narcissistic age—a shining example of the transformative and redemptive power of moral courage.

Chris Edmonds is a sought-after speaker and senior pastor of Piney Grove Baptist Church in Maryville, Tennessee. He is the son of WWII Hero, Army Master Sergeant Roddie Edmonds, Righteous Among the Nations—candidate for the Medal of Honor and the Congressional Gold Medal. Pastor Chris has been featured by the Associated Press, ABC, CBS, NBC, CNN, FOX News, PBS, the New York Times, the Washington Post, Facebook, Twitter, and others. Since 2016, more than a million people have been inspired by Roddie’s C.O.D.E. to choose love and oppose hate. Pastor Chris earned a bachelor’s degree in human resources at the University of Tennessee and, a master’s degree in religion at Liberty Theological Seminary. He also teaches Leadership Development to military leaders at the University of Alabama at Huntsville. He and his wife Regina live in Maryville with their family and seven of the coolest grandchildren on the planet.

Douglas Century is an author, journalist, and screenwriter. He is the coauthor most recently of "Hunting El Chapo," and coauthored several New York Times bestsellers, including "Under and Alone" and "Takedown: The Fall of the Last Mafia Empire," which was a finalist for the 2003 Edgar Award in the category of Best Nonfiction Crime Book. He also co-authored "If Not Now, When? Duty and Sacrifice In America’s Time of Need," which won the 2010 Colby Award. A veteran investigative journalist, Century is a contributing editor at Tablet Magazine and writes for Billboard and The New York Times. He lives in New York.