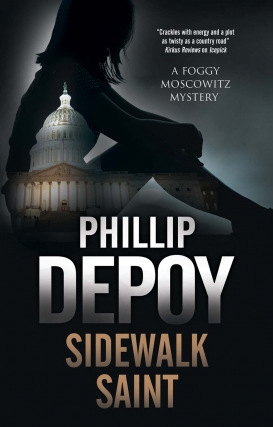 At the December edition of Writers at the Wrecking Bar, Edgar Award-winning author of the popular "Flap Tucker" and "Fever Devilin" mysteries, Phillip DePoy, will discuss, “Sidewalk Saint,” the latest book from his "Foggy Moskowitz" series. DePoy will be joined by Alison Law, host of the "Literary Atlanta" podcast.

The author will perform a short musical set with his band, The Dianas, ahead of the conversation.

Amateur sleuth and Child Protective Officer Foggy Moscowitz must find a missing girl with a special gift in this latest noir mystery set in Florida.

Florida, 1976. Foggy Moscowitz knows he’s having a bad night when he wakes to find a gun pressed to his face. Nelson Roan has busted out of his prison cell and broken into Foggy’s house, demanding Foggy finds his eleven-year-old daughter, Etta. But as Foggy searches for Etta, it seems her father is not the only person who wants her found: Canadian mobsters, crazy New York Irishmen, the FBI and even the Seminole elite are all on her trail. But why?

Etta has a special gift – and she knows something that certain people would go to any lengths to make sure stays buried in her memory. As Foggy helps Etta to reveal what she knows, he uncovers a sinister plot with tentacles that stretch further and higher than he could ever have imagined . . .

Phillip DePoy is the Edgar Award winning author of twenty novels and forty-three plays. An internationally reviewed performance artist, he was writer in residence for the Georgia Council for the Arts in the 1980s. As Composer in Residence for the Academy Theatre he wrote music for twenty-seven productions there. In the 1990s he was the Artistic Director of Theatrical Outfit, a professional, Equity theatre. Since then he has served as the director of several university theatre programs. He was Georgia Author of the Year in 2015.

His publications include the Flap Tucker mysteries published by Dell (one was a Shamus finalist), seven "Fever Devilin" novels and two "Christopher Marlowe" mysteries from St. Martins, and the "Foggy Moscowitz" series of novels put out by Severn House of London.  Non-fiction publications include "The Tao and the Bard" and "Messages from Beyond."

A Cappella Books presents Writers at the Wrecking Bar, a series of live author interview events showcasing some of the country's freshest voices in literary and contemporary fiction, presented at our neighborhood brewpub. Each program includes writers in conversation with an arbiter of Atlanta's book scene, giving the audience a chance to experience and participate in the Q&A, and get a signed copy of the book. Select events will feature performances by notable local musicians.