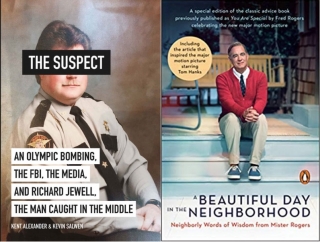 Saturday, December 14 at 4 p.m., enjoy some cheer at A Cappella Books at our special meet & greet and book signing with the authors behind two of the biggest holiday films of the year!

Authors Kent Alexander and Kevin Salwen will sign copies of their book, “The Suspect: An Olympic Bombing, the FBI, the Media, and Richard Jewell, the Man Caught in the Middle.”

Salwen and Alexander both consulted on the upcoming Clint Eastwood film, "Richard Jewell," which will be released on December 13.

Also joining us is award-winning journalist Tom Junod. The 2019 feature film starring Tom Hanks, “A Beautiful Day in the Neighborhood” is based on Junod’s famous Esquire profile of beloved children's show host, Fred Rogers. The author will sign copies of the newly reprinted edition of “A Beautiful Day in the Neighborhood: Neighborly Words of Wisdom from Mister Rogers,” which includes his piece as the introduction.

On July 27, 1996, a hapless former cop turned hypervigilant security guard named Richard Jewell spotted a suspicious bag in Atlanta’s Centennial Olympic Park, the town square of the 1996 Summer Games. Inside was a bomb, the largest of its kind in FBI and ATF history. Minutes later, the bomb detonated amid a crowd of fifty thousand people. But thanks to Jewell, it only wounded 111 and killed two, not the untold scores who would have otherwise died. With the eyes of the world on Atlanta, the Games continued. But the pressure to find the bomber was intense. Within seventy-two hours, Jewell went from the hero to the FBI’s main suspect. The news leaked and the intense focus on the guard forever changed his life. The worst part: It let the true bomber roam free to strike again.

What really happened that evening during the Olympic Games? The attack left a mark on American history, but most of what we remember is wrong. In a triumph of reporting and access in the tradition of the best investigative journalism, former U.S. Attorney Kent Alexander and former Wall Street Journal reporter Kevin Salwen reconstruct all the events leading up to, during, and after the Olympic bombing from mountains of law enforcement evidence and the extensive personal records of key players, including Richard himself.

“The Suspect,” the culmination of more than five years of reporting, is a gripping story of the rise of domestic terrorism in America, the advent of the 24/7 news cycle, and an innocent man’s fight to clear his name.

Kent Alexander was the US Attorney for the Northern District of Georgia at the time of the 1996 Olympics. He spent hundreds of hours in meetings with the FBI about the bombing, and ultimately, he wrote and hand-delivered Jewell’s clearance letter.

Journalist Kevin Salwen was a longtime Wall Street Journal reporter and editor, who ran the paper’s southeastern section during the Olympic Games. He is the co-author (with his daughter, Hannah) of "The Power of Half: One Family’s Decision to Stop Taking and Start Giving Back."

About “A Beautiful Day In The Neighborhood”

Tom Junod’s Esquire profile of Fred Rogers, “Can You Say... Hero?,” has been hailed as a classic of magazine writing. Now, his moving story of meeting and observing the beloved host of Mister Rogers’ Neighborhood is the inspiration for “A Beautiful Day in the Neighborhood,” directed by Marielle Heller and written by Micah Fitzerman-Blue & Noah Harpster.

Here, Junod’s unforgettable piece appears for the first time in book form alongside an inspiring collection of advice and encouragement from Mister Rogers himself. Covering topics like relationships, childhood, communication, parenthood, and more, Rogers’s signature sayings and wise thoughts are included here. Pairing the definitive portrait of a national icon with his own instructions for living your best, kindest life, this book is a timeless treasure for Mister Rogers fans.

Tom Junod is an American journalist. He is the recipient of two National Magazine Awards from the American Society of Magazine Editors, the most prestigious award in magazine writing.

Junod has worked as a writer for Esquire magazine since 1997, after following editor David Granger to the magazine from GQ. He also worked for Atlanta Magazine, Life, Sports Illustrated. Junod has published some of the most celebrated pieces in American magazine writing, including, “The Abortionist,” “The Falling Man,” and a 2001 piece on R.E.M. lead singer Michael Stipe, in which he satirically fabricated information.

In 2011, Junod won the James Beard Award for his essay “My Mom Couldn't Cook,” published in Esquire magazine in September 2010.