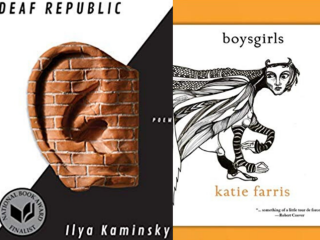 Join the Georgia Center for the Book for a poetry reading and book signingwith Ilya Kaminsky and Katie Farris. Doors open at 6:30.

This event is free and open to the public. A Cappella will have copies of the authors' books available for purchase.

Ilya Kaminsky was born in the former Soviet Union city of Odessa. He lost most of his hearing at the age of four after a doctor misdiagnosed mumps as a cold, and his family was granted political asylum by the United States in 1993, settling in Rochester, New York. After his father’s death in 1994, Kaminsky began to write poems in English. Kaminsky went on to earn a BA in political science at Georgetown University and a JD at the University of California’s Hastings College of the Law. With Paloma Capanna, he co-founded Poets for Peace, which sponsors poetry readings across the globe to support relief work. He has also worked as a clerk for the National Immigration Law Center and for Bay Area Legal Aid.

Kaminsky is the author of "Dancing in Odessa," which won the Tupelo Press Dorset Prize, the American Academy of Arts and Letters’ Metcalf Award, and ForeWord Magazine’s Best Poetry Book of the Year award, and has been translated into French and Romanian. "Traveling Musicians" is a selection of his poems originally written in Russian. His most recent collection is "Deaf Republic." He co-edited, with Susan Harris, the "Ecco Anthology of International Poetry," and edited and co-translated Polina Barskova’s "This Lamentable City." He has also served as the editor of the online journal In Posse Review.

Katie Farris is the author of the hybrid-form text "boysgirls." "boysgirls" has been lauded as “truly innovative” by The Prague Post, and as “a tour de force” by Robert Coover. She is also the author of the chapbooks "Thirteen Intimacies," and "Mother Superior in Hell." Most recently, she is the winner of Fairy Tale Review’s Flash Fairy Tale Prize, the 2018 Anne Halley Poetry Prize from the Massachusetts Review, and the 2017 Orison Anthology Prize in Fiction. Her work has appeared in literary journals, including Poetry, The Believer, Verse, and The Massachusetts Review. She is the co-translator of several books of poetry from the French, Chinese, and Russian, including "Gossip and Metaphysics: Russian Modernist Poems and Prose." She graduated with an MFA from Brown University and is currently an Associate Professor of Literature, Media, and Communication at Georgia Institute of Technology.