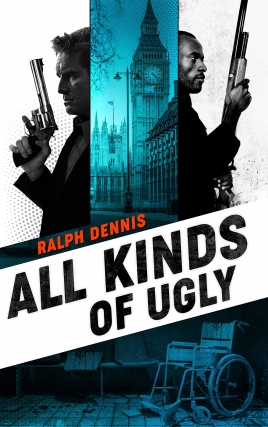 Please join us at 7 p.m. on Tuesday, February 11, at the Highland Inn Ballroom Lounge to celebrate the career of the late Atlanta crime novelist Ralph Dennis in honor of the release of his previously unpublished, 13th and final book featuring former cop and unofficial private eye Jim Hardman, "All Kinds of Ugly."

Dennis's "Hardman" series, set entirely in Atlanta, was originally published between 1974 and 1977 by Popular Library, and thus went largely unrecognized by critics during his lifetime. The books, in the world-weary voice of Hardman, evoke a city in transition, pulling away, however groaningly, from its traditional Southern attitudes on racial and sexual matters. Though in many ways unrecognizable as the same place we live in today, the familiar landmarks in Dennis's detailed, finely observed stories serve as an uncomfortable snapshot of our hometown a half century ago.

This event is free and open to the public. A Cappella Books will have copies available for purchase of the entire, newly reissued "Hardman" series as well as other rediscovered works by Dennis, in addition to books by Goldberg and Dubrow.

“All Kinds of Ugly” is the long-lost, never-before-published, thirteenth novel in the legendary Hardman series.

Jim Hardman will do just about anything for a buck, short of a felony, though he has been known to push the line. It’s career choice that takes a big toll on his soul and leads him to a shocking discovery that breaks his heart. That’s when a high-powered lawyer hires him to go to London to find the missing heir of a wealthy Georgia industrialist. The timing is perfect for Hardman, who is eager to escape his personal pain. But misery of a different sort is awaiting him in England, where he becomes embroiled in an ugly case of embezzlement and murder that follows him back to Atlanta…and that will have a devastating impact on his life.

Ralph Dennis isn’t a household name… but he should be. He is widely considered among crime writers as a master of the genre, denied the recognition he deserved because his 12 Hardman books, which are beloved and highly sought-after collectables now, were poorly packaged in the 1970s by Popular Library as a cheap men’s action-adventure paperbacks with numbered titles.

Even so, some top critics saw past the cheesy covers and noticed that he was producing work as good as John D. MacDonald, Raymond Chandler, Chester Himes, Dashiell Hammett, and Ross MacDonald.

The New York Times praised the “Hardman” novels for “expert writing, plotting, and an unusual degree of sensitivity. Dennis has mastered the genre and supplied top entertainment.”

The Philadelphia Daily News proclaimed Hardman “the best series around, but they’ve got such terrible covers…”

Unfortunately, Popular Library didn’t take the hint and continued to present the series like hack work, dooming the novels to a short shelf-life and obscurity…except among generations of crime writers, like novelist Joe R. Lansdale (the Hap & Leonard series) and screenwriter Shane Black (the Lethal Weapon movies), who’ve kept Dennis’s legacy alive through word-of-mouth and by acknowledging his influence on their stellar work.

Ralph Dennis wrote three other novels that were published outside of the “Hardman” series but he wasn’t able to reach the wide audience, or gain the critical acclaim, that he deserved during his lifetime.

He was born in 1931 in Sumter, South Carolina, and received a master’s degree from the University of North Carolina, where he later taught film and television writing after serving a stint in the Navy. At the time of his death in 1988, he was working at a bookstore in Atlanta and had a file cabinet full of unpublished novels.

Brash Books has released the entire “Hardman” series, his three other published novels, and his long-lost manuscripts.

Goldberg broke into television with a freelance script sale to "Spenser: For Hire." Since then, his television writing and producing credits have covered a wide variety of genres, including sci-fi ("SeaQuest"), cop shows ("Hunter," "The Glades"), martial arts ("Martial Law"), whodunits ("Diagnosis Murder," "Nero Wolfe"), the occult ("She-Wolf of London"), kid's shows ("R.L. Stine's The Nightmare Room"), T&A ("Baywatch"), comedy ("Monk") and utter crap ("The Highwayman"). His TV work has earned him two Edgar Award nominations from the Mystery Writers of America.

His two careers, novelist and television writer, merged when he began writing the "Diagnosis Murder" series of original novels, based on the hit CBS TV mystery that he also wrote and produced, and later wrote the 15 bestselling novels based on "Monk," another show that he worked on. He's also the co-creator of Amazon's "The Dead Man" series of monthly horror novellas and the author of the crime thriller "King City." Most recently, he teamed up with Janet Evanovich to write the #1 New York Times bestselling "Fox & O'Hare" novels ("The Heist," "The Chase," "The Job," "The Scam," and "The Pursuit").

Goldberg lives in Los Angeles with his wife and his daughter. His crime novel, "Lost Hills" was released on January 1, 2020.