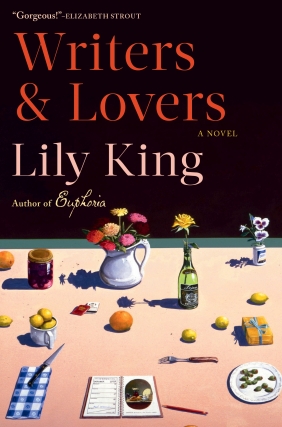 Following the breakout success of her critically acclaimed and award-winning novel "Euphoria," Lily King returns with an unforgettable portrait of an artist as a young woman.

A Cappella Books welcomes the bestselling author to SCADshow in honor of her new novel, "Writers & Lovers."

This event is free and open to the public. Reserve your seat by pre-ordering a copy of "Writers & Lovers" from A Cappella. Or, if you are unable to attend the event, you may pre-order a signed copy of the book for in-store pickup or delivery below:

Blindsided by her mother’s sudden death, and wrecked by a recent love affair, Casey Peabody has arrived in Massachusetts in the summer of 1997 without a plan. Her mail consists of wedding invitations and final notices from debt collectors. A former child golf prodigy, she now waits tables in Harvard Square and rents a tiny, moldy room at the side of a garage where she works on the novel she’s been writing for six years. At thirty-one, Casey is still clutching onto something nearly all her old friends have let go of: the determination to live a creative life. When she falls for two very different men at the same time, her world fractures even more. Casey’s fight to fulfill her creative ambitions and balance the conflicting demands of art and life is challenged in ways that push her to the brink.

"Writers & Lovers" follows Casey—a smart and achingly vulnerable protagonist—in the last days of a long youth, a time when every element of her life comes to a crisis. Written with King’s trademark humor, heart, and intelligence, "Writers & Lovers" is a transfixing novel that explores the terrifying and exhilarating leap between the end of one phase of life and the beginning of another.

Lily King’s novel "Father of The Rain" (2010) was a New York Times Editors Choice, a Publishers Weekly Best Novel of the Year and winner of the 2010 New England Book Award for Fiction and the Maine Fiction Award. "The English Teacher" (2005) won the Maine Fiction Award, was a Publishers Weekly Top Ten Book of the Year and a Chicago Tribune Best Book of the Year. Her first novel, "The Pleasing Hour" (1999), won the B&N Discover Award, was a New York Times Notable Book and an alternate for the PEN/Hemingway Award. King is also the recipient of a Whiting Writers’ Award. She lives with her husband and children in Maine.