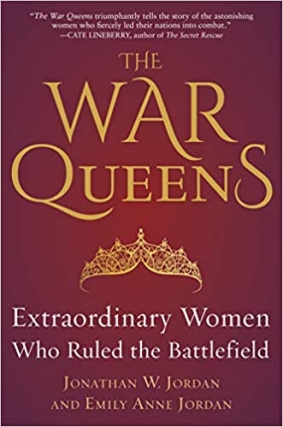 Father-daughter duo Jonathan and Emily Jordan uncover the ingenious wartime tactics of some of history's most powerful female leaders across millennia and continents, from the stifling battlefields of ancient Egypt to the frigid waters off the Falkland Islands.

This event is free and open to the public. Reserve your seat by pre-ordering a copy of "The War Queens" from A Cappella.

History's killer queens come in all colors, ages, and leadership styles. Elizabeth Tudor and Golda Meir played the roles of high-stakes gamblers who studied maps with an unblinking, calculating eye. Angola's Queen Njinga was willing to shed (and occasionally drink) blood to establish a stable kingdom in an Africa ravaged by the slave trade. Caterina Sforza defended her Italian holdings with cannon and scimitar, and Indira Gandhi launched a war to solve a refugee crisis.

From ancient Persia to modern-day Britain, the daunting thresholds these exceptional women had to cross--and the clever, sometimes violent ways in which they overcame them--are evoked in vivid detail by Jonathan and Emily Jordan. The narrative sidles up to each war queen in the most dire, tumultuous moments of their reigns and examines the brilliant methods and maneuvers they each used to defend themselves and their constituents from enemy forces. In the end, we come away with a new awareness of the extraordinary power and potential of women in history who walked through war's kiln and emerged from the other side--some burnished to greatness, others burned to cinders.

Father-daughter duo Jonathan W. and Emily Anne Jordan extoll the extraordinary power and potential of women in history who walked through war's kiln and emerged from the other side--some burnished to greatness, others burned to cinders. All of them, legends.

Jonathan Jordan is a military historian and an award-winning author of three books, including the New York Times bestseller “Brothers, Rivals, Victors: Eisenhower, Patton, Bradley and the Partnership that Drove the Conquest of Europe.” He is a regular book critic for The Wall Street Journal, editor of the Library of Texas edition of To the People of Texas, a contributing author to “The Amazing Book of World History” and “The Amazing Book of World War II,” and the author of nearly two dozen articles appearing in MHQ: The Quarterly Journal of Military History, World War II Magazine, Military History, and World War II History magazines. In addition to showcasing his military history expertise in the documentary “Silence Patton,” he has made numerous live, televised, podcast, and radio appearances. Jonathan lives with his family in Marietta, Georgia.

Emily Anne Jordan, daughter of Jon, is a debut author, women’s history researcher, and nursing student at the University of Kentucky, where she contributes to the literary blog Odyssey.