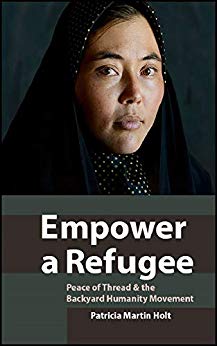 In her new book, award-winning author Patricia Martin Holt demonstrates that good-hearted people can overcome the national climate of fear and bigotry toward refugees.

“Empower a Refugee: The Backyard Humanity Movement and Peace of Thread,” tells the story behind the Clarkston, Georgia non-profit that empowers women who have come to the United States seeking refuge from war, persecution, and poverty to make a new life for themselves and their families.

Peace of Thread handbags will be available for purchase at the event, along with copies of the book.

Refugees from the Middle East and Asia who have fled famine and violence and resettled in the US too often are isolated, disconnected, living in despair. Will their lives disintegrate?

Enter a group of ordinary Americans who recognized the need, created a solution, got results—and found their own lives uplifted in the process.

Author Patricia Martin Holt reports on Peace of Thread, a non-profit founded by Denise Smith, who lived near Atlanta and had previously learned Arabic during six years of mission work in Lebanon. Smith befriended refugee women and built on the fabric skills that many women brought with them.

Now the women are creating handbags and accessories and selling them on Etsy and in several specialty shops. They have new confidence, feel more at home, and are finding purpose in their lives.

Patricia Martin Holt demonstrates that good-hearted people can overcome the national climate of fear and bigotry toward refugees. It turns out that we can work for world peace by merely lending a hand to those in need—in the same cities, counties, and neighborhoods where we live.

Patricia Martin Holt is an American author living and writing in Atlanta, Georgia. Her debut non-fiction book, “Committee of One: Making a Difference One Life at a Time,” is a story of survival, heroism, courage, and determination. Ms. Holt was named Georgia Author of the Year and was awarded the Bronze Medal by the Independent Publishers Association.

Her marriage required a move to Amman, Jordan, where her husband was helping the country to obtain water resources. She shed her life as a management consultant to learn the culture, traditions, and history of the Arab people. Meeting Leila Wahbeh, the Committee of One who changed the lives of thousands of refugees by giving them a hand up, changed Ms. Holt’s as well.

Her forthcoming book, “Empower a Refugee: The Backyard Humanity Movement and Peace of Thread,” tells the stories of refugees resettled in Clarkston, Georgia, a community near Atlanta representing fifty-three nations. It describes the terrors of fleeing one’s home country due to war, famine or drought, spending years in refugee camps, and finally being sent to one of ten countries accepting refugees. The women settled here meet Denise Smith of Peace of Thread, who gives them a hand up by teaching them to sew and sell one-of-a-kind handbags.

About Peace of Thread

Peace of Thread is a non-profit organization seeking to give a voice to refugee families in vulnerable populations through employment.