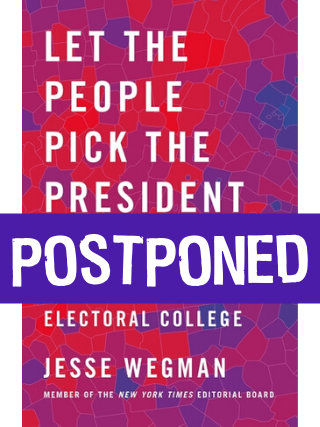 A radical spirit of change has overtaken American politics, making once-unthinkable reforms—like abolishing the Electoral College—seem possible. In "Let the People Pick the President,” New York Times editorial board member Jesse Wegman makes a powerful case for abolishing the antiquated and antidemocratic Electoral College, and choosing presidents based on a national popular vote.

Wegman will appear in conversation with Rose Scott, host of WABE's "Closer Look."

This event is part of our ongoing lecture series on the fairness and accuracy of American elections and is free and open to the public.

Reserve your seat by pre-ordering a copy of “Let the People Pick the President” from A Cappella.

Two of the last five elections were won by candidates who lost the popular vote, calling the integrity of the entire electoral system into question. Political passions are already high, and they will reach a boiling point as we enter the 2020 race. The message from the American people is clear: we need major reform, and we need it now.

Wegman uncovers the Electoral College's controversial origins, profiles the many attempts to reform it over the years and explains why it is now essential for us to remove this obsolete system and finally make every citizen's vote matter.

Wegman addresses objections from both sides of the aisle and presents an airtight argument that moving toward a national popular vote would reduce voter apathy and political polarization, increase voter turnout, and restore belief in our democratic system. Abolishing the Electoral College is the keystone reform that must be accomplished to improve our politics; Wegman shows that this once-lofty goal can be achieved and charts a path to accomplishing it.

Jesse Wegman is a member of The New York Times editorial board, where he has written about the Supreme Court and legal affairs since 2013. He previously worked as a reporter, editor and producer at outlets including National Public Radio, The New York Observer, Reuters, The Daily Beast and Newsweek. He graduated from New York University School of Law in 2005.