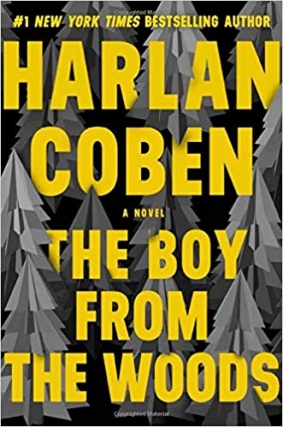 In this shocking new thriller from Harlan Coben, the #1 New York Times bestselling author of "Run Away," a man whose past is shrouded in mystery must find a missing teenage girl before her disappearance brings about disastrous consequences for her community...and the world.

Coben will discuss his latest novel during this Page From the Book Festival of the MJCCA event with Atlanta's own Emily Giffin, author of "All We Ever Wanted."

Each ticket includes a copy of "The Boy from the Woods." A Cappella Books will have additional copies of the books available for purchase.

The man known as Wilde is a mystery to everyone, including himself. Decades ago, he was found as a boy living feral in the woods, with no memory of his past. After the police concluded an exhaustive hunt for the child's family, which was never found, he was turned over to the foster system. Now, 30 years later, Wilde still doesn't know where he comes from, and he's back living in the woods on the outskirts of town, content to be an outcast, comfortable only outdoors, preferably alone, and with few deep connections to other people.

When a local girl goes missing, famous TV lawyer Hester Crimstein--with whom Wilde shares a tragic connection--asks him to use his unique skills to help find her. Meanwhile, a group of ex-military security experts arrive in town, and when another teen disappears, the case's impact expands far beyond the borders of the peaceful suburb. Wilde must return to the community where he has never fit in, and where the powerful are protected even when they harbor secrets that could destroy the lives of millions...secrets that Wilde must uncover before it's too late.

With more than seventy million books in print worldwide, Harlan Coben is the #1 New York Times bestselling author of numerous suspense novels, including "Run Away," "Don't Let Go," and "Fool Me Once," as well as the multi-award-winning "Myron Bolitar" series. His books are published in forty-three languages around the globe and have been number one bestsellers in more than a dozen countries.  The "Boy from the Woods" is his 32nd book.