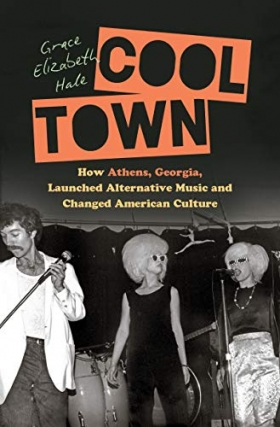 As a student, small-business owner, and band member, author Grace Elizabeth Hale experienced the seminal Athens, Georgia music scene of the 80s firsthand. Blending personal recollection with a historian's eye, she reconstructs the story of the small college town's resourceful networks of bands, artists, and friends who made a new art of the possible, transforming American culture and alternative music along the way.

The Atlanta History Center welcomes the author for a virtual discussion of her new book, “Cool Town: How Athens, Georgia, Launched Alternative Music and Changed American Culture” with GBP "On Second Thought" host Virginia Prescott on Thursday, August 6, 2020, at 7:00 PM. This event is free and open to the public. Join the discussion via the link below.

A Cappella Books will have copies of "Cool Town" available after the event. Pre-order via the link below. At checkout, choose between the local delivery, curbside pick-up, or shipping options. For zip codes not listed in the above banner, select curbside pick-up or USPS shipping.

In Athens in the eighties, if you were young and willing to live without much money, anything seemed possible. Cool Town reveals the passion, vitality, and enduring significance of a bohemian scene that became a model for others to follow.

In a story full of music and brimming with hope, Hale shows how an unlikely cast of characters in an unlikely place made a surprising and beautiful new world.

Grace Elizabeth Hale is the Commonwealth Professor of American Studies and History at the University of Virginia. Her previous books include “A Nation of Outsiders: How the White Middle Class Fell in Love with Rebellion in Postwar America” and “Making Whiteness: The Culture of Segregation in the South, 1890–1940.”