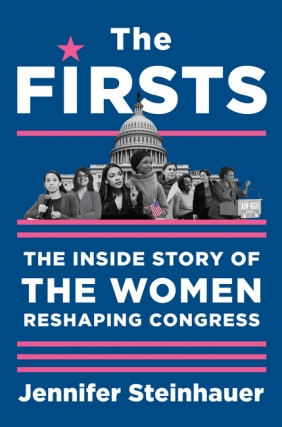 The Atlanta History Center welcomes New York Times reporter Jennifer Steinhauer for a virtual discussion on her new book, “The Firsts,” a lively, behind-the-scenes look at the historic cohort of diverse, young, and groundbreaking women newly elected to the House of Representatives in 2018 as they arrive in Washington, D.C., and start working for change.

Steinhauer will appear in discussion with Virginia Prescott, host of GBP’s “On Second Thought.”

This event is free and open to the public. Join the discussion via the link below on Wednesday, April 15, at 7:00 pm.

A Cappella Books has copies of “The Firsts” available for purchase and will provide local drop-off to most in-town Atlanta neighborhoods, as well as prompt shipping to customers outside of our delivery areas.

In November 2018, the largest number of women ever was elected to the 116th Congress, resulting in a grand total of 87 in the House and 23 in the Senate. Ushered in on a groundswell of grassroots support, diverse in background, age, professional experience, and ideology, the new freshmen immediately began making history—and noise. These include Alexandria Ocasio-Cortez, the youngest woman to be elected to the House; Sharice Davids and Deb Haaland, the first Native American women in Congress; Rashida Tlaib and Ilhan Omar, the first Muslim women representatives; and Abigail Spanberger, a former CIA agent.

Veteran Hill reporter Jennifer Steinhauer follows these women’s attempts to transcend the partisan rancor and dysfunction of Congress from their positions as upstarts and backbenchers in a Democratic caucus directed by leaders old enough to be their grandparents. Moving on from their trailblazing campaigns to the daily work of governance, these women will confront whether a gender and generational shift in the House can overcome institutional inertia. Will they work with their party’s leadership, or will they work to overthrow it? Will their protests of the power structure fizzle, or will they create a lasting legislative framework for their ideas? How will they get on with their older peers, some of whom may feel resentful or pushed aside? What do their new roles mean for their lives back home, and how do they adjust to the weird, exciting, and often toxically seductive trappings of public office in the age of the twenty-four-hour news cycle?

Jennifer Steinhauer has covered numerous high-profile beats in her twenty-five-year reporting career at The New York Times, from City Hall bureau chief and Los Angeles bureau chief to Capitol Hill. She won the Newswoman’s Club of New York Front Page Deadline Reporting Award in 2006 for her reporting on Hurricane Katrina. She has written a novel about the television business and two cookbooks.