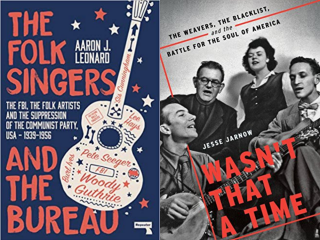 A Cappella Books continues our virtual music series in January with authors Aaron Leonard and Jesse Jarnow, who will join us for a conversation on their respective books, “The Folk Singers and the Bureau: The FBI, the Folk Artists and the Suppression of the Communist Party, USA-1939-1956,” and “Wasn't That a Time: The Weavers, the Blacklist, and the Battle for the Soul of America.”

A Cappella Books will have copies of both titles available after the event. Pre-order via the link below. At checkout, choose between the local delivery, curbside pick-up, or shipping options. For zip codes not listed in the above banner, select curbside pick-up or USPS shipping.

Pre-order "The Folk Singers and the Bureau"

Pre-order "Wasn't That a Time"

About “The Folk Singers & the Bureau”

The first book to document the efforts of the FBI against the most famous American folk singers of the mid-twentieth century, including Woody Guthrie, 'Sis Cunningham, Pete Seeger, Lee Hays and Burl Ives.

Some of the most prominent folk singers of the twentieth century, including Woody Guthrie, 'Sis Cunningham, Pete Seeger, Lee Hays, Burl Ives, etc., were also political activists with various associations with the American Communist Party. As a consequence, the FBI, along with other governmental and right-wing organizations, were monitoring them, keeping meticulous files running many thousands of pages, and making (and carrying out) plans to purge them from the cultural realm.

In “The Folk Singers and the Bureau,” Aaron J. Leonard draws on an unprecedented array of declassified documents and never before released files to shed light on the interplay between left-wing folk artists and their relationship with the American Communist Party, and how it put them in the US government's repressive cross hairs.

At a time of increasing state surveillance and repression, “The Folk Singers and the Bureau” shows how the FBI and other governmental agencies have attempted to shape and repress American culture.

About “Wasn’t That a Time”

The dramatic untold story of the Weavers, the hit-making folk-pop quartet destroyed with the aid of the United States government -- and who changed the world, anyway

Following a series of top-ten hits that became instant American standards, the Weavers dissolved at the height of their fame. “Wasn't That a Time: The Weavers, the Blacklist, and the Battle for the Soul of America” details the remarkable rise of Pete Seeger's unlikely band of folk heroes, from basement hootenannies to the top of the charts, and the harassment campaign that brought them down.

Exploring how a pop group's harmonies might be heard as a threat worthy of decades of investigation by the FBI, “Wasn't That a Time” turns the black-and-white 1950s into vivid color, using the Weavers to illuminate a dark and complex period of American history. With origins in the radical folk collective the Almanac Singers and the ambitious People's Songs, the singing activists in the Weavers set out to change the world with songs as their weapons, pioneering the use of music as a transformative political organizing tool.

Using previously unseen journals and letters, unreleased recordings, once-secret government documents, and other archival research, Jesse Jarnow uncovers the immense hopes, incredible pressures, and daily struggles of the four distinct and often unharmonious personalities at the heart of the Weavers.

In an era defined by a sharp political divide that feels all too familiar, the Weavers became heroes. With a class -- and race -- conscious global vision that now makes them seem like time travelers from the twenty-first century, the Weavers became a direct influence on a generation of musicians and listeners, teaching the power of eclectic songs and joyous, participatory harmonies.

Jesse Jarnow is the author of “Big Day Coming: Yo La Tengo” and the “Rise of Indie Rockand Heads: A Biography of Psychedelic America.” His writing on music, technology, and culture has appeared in the Times (London), the Village Voice, Rolling Stone, Pitchfork, Wired.com, Relix (contributing editor), Dupree’s Diamond News, and elsewhere. He lives in Brooklyn, New York, and hosts “The Frow Show” on the independent Jersey City radio station WFMU.