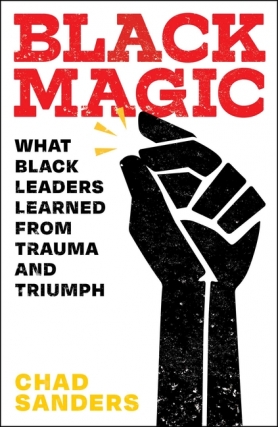 In his revelatory new book, author and screenwriter Chad Sanders uncovers Black experiences in predominantly white environments while demonstrating the importance of staying true to one’s self.

The Atlanta History Center welcomes the author for a virtual discussion of "Black Magic: What Black Leaders Learned from Trauma and Triumph," on Thursday, February 4, 2021, at 7 PM (EST). Sanders will appear in conversation with GBP’s Virginia Prescott.

A Cappella Books will have copies of "Black Magic" available after the event. Pre-order via the link below. At checkout, choose between the local delivery, curbside pick-up, or shipping options. For zip codes not listed in the above banner, select curbside pick-up or USPS shipping.

When Chad Sanders landed his first job in lily-white Silicon Valley, he quickly realized that to be successful at work meant playing a certain social game. Each meeting was drenched in white slang and the privileged talk of international travel or a folk concert in San Francisco, which led Chad to realize that he could only be successful if he emulated whiteness.

So Chad changed. He changed his wardrobe, his behavior, his speech—everything that connected him with his Black identity. And while he finally felt included, he felt awful. Carrying the unbearable weight of his imposter syndrome—the constant burden of not being true to himself—left Chad exhausted and ashamed. Instead, he decided to give up the charade. He reverted back to methods he learned at the dinner table, or at the Black Baptist church where he’d been raised, or the concrete basketball courts. And it paid off. Chad began to land more exciting projects and eventually got promoted. He earned the respect of his colleagues and clients. Accounting for this turnaround, Chad believes, was something he calls Black Magic, namely: resilience, creativity, and perseverance, forged in his experience navigating America as a Black man. Black Magic has emboldened his every step since. Leading him to wonder: was he alone in this discovery? Were there others who felt the same?

In "Black Magic," Chad tells his own incredible story while also interviewing other Black leaders, scientists, artists, business people, parents, innovators, and champions, to get their take on Black magic.

Chad Sanders is a writer based in New York City. Chad’s screenwriting career began when he wrote for ABC Freeform’s "Grownish" in 2018. Previously, Chad worked at Google in the YouTube and People Operations divisions and as a tech entrepreneur. He has since written and co-written forthcoming TV series and feature films with collaborators Spike Lee, Morgan Freeman, and Will Packer. Chad’s Op-Ed pieces have appeared in The New York Times and Teen Vogue. In the past decade, Chad has resided in New York, Berlin, London, Oakland, and Atlanta. Chad earned his BA at Morehouse College in 2010. He was born and raised in Silver Spring, Maryland.