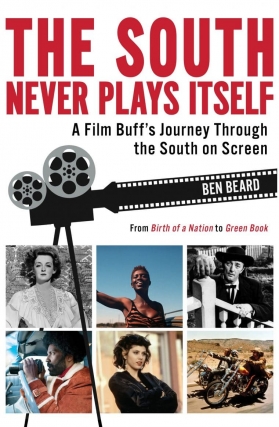 From “The Birth of a Nation” to “Forrest Gump,” from the bayou to the Appalachians, American filmmakers have been fascinated by the South since the invention of the medium. Deeply complex and often mysterious, the character of the South makes for compelling stories. Ben Beard’s new book, “The South Never Plays Itself” examines those stories through the lenses of criticism and historical perspective.

The Atlanta History Center welcomes the author for a virtual discussion on Thursday, June 3, 2021, at 7 PM (EST). Beard will appear in conversation professor, chair, and director of graduate studies in the Film Studies Department at Emory University, Matthew Bernstein.

Pre-order a copy of “The South Never Plays Itself” via the link below. At checkout, choose between the local delivery, curbside pick-up, or shipping options. For zip codes not listed in the above banner, select curbside pick-up or USPS shipping.

Since “Birth of a Nation” became the first Hollywood blockbuster in 1915, movies have struggled to reckon with the American South―as both a place and an idea, a reality and a romance, a lived experience and a bitter legacy. Nearly every major American filmmaker, actor, and screenwriter has worked on a film about the South, from “Gone with the Wind” to “12 Years a Slave,” from “Deliverance” to “Forrest Gump.” In “The South Never Plays Itself,” author and film critic Ben Beard explores the history of the Deep South on screen, beginning with silent cinema and ending in the streaming era, from President Wilson to President Trump, from musical to comedy to horror to crime to melodrama. Beard’s idiosyncratic narrative―part cultural history, part film criticism, part memoir―journeys through genres and eras, issues and regions, smash blockbusters and microbudget indies, to explore America’s past and troubled present, seen through Hollywood’s distorting lens. Opinionated, obsessive, sweeping, often combative, sometimes funny―a wild narrative tumble into culture both high and low―Beard attempts to answer a haunting question: what do movies know about the South that we don’t?

Ben Beard is a writer and librarian. He is the co-author of “This Day in Civil Rights History” and the author of “Muhammad Ali: The Greatest,” and “King Midas in Reverse.” In the 2000s, Beard reviewed movies and wrote features for InSite Magazine, King Kudzu, and Filmmonthly.com, where he also worked as an editor. Beard, a native of Georgia who spent his formative years in the Florida Panhandle and Alabama, currently lives in Chicago with his wife and three children. He is always working on a new book.