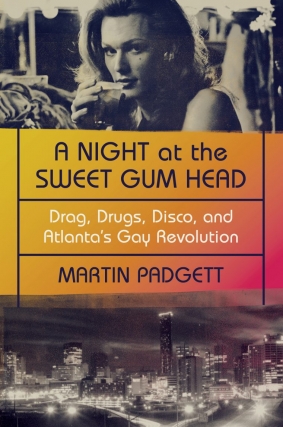 In his new book, “A Night at the Sweet Gum Head,” author Martin Padgett gives us an electric and intimate story of 1970s gay Atlanta through its bedazzling drag clubs and burgeoning rights activism.

The Atlanta History Center welcomes the author for a virtual discussion of the book on Tuesday, June 8, at 7 PM (EST). Padgett will appear in conversation with Philip Rafshoon, Director of Member Engagement for Midtown Alliance and founder and operator of Outwrite, Atlanta’s LGBTQ Bookstore and Coffeehouse from 1993-2012.

Pre-order a signed copy of “A Night at the Sweet Gum Head” via the link below. At checkout, choose between the local delivery, curbside pick-up, or shipping options. For zip codes not listed in the above banner, select curbside pick-up or USPS shipping.

Coursing with a pumped-up beat, gay Atlanta was the South's mecca—a beacon for gays and lesbians growing up in its homophobic towns and cities. There, the Sweet Gum Head was the club for achieving drag stardom.

Martin Padgett evokes the fantabulous disco decade by going deep into the lives of two men who shaped and were shaped by this city: John Greenwell, an Alabama runaway who found himself and his avocation performing as the exquisite Rachel Wells; and Bill Smith, who took to the streets and city hall to change antigay laws. Against this optimism for visibility and rights, gay people lived with daily police harassment and drug dealing and murder in their discos and drag clubs. Conducting interviews with many of the major figures and reading through deteriorating gay archives, Padgett expertly re-creates Atlanta from a time when a vibrant, new queer culture of drag and pride came into being.

Martin Padgett has an MFA from the University of Georgia’s Grady College of Journalism and received a 2019 Lambda Literary Fellowship. He has written for Oxford American, Gravy, Details, and Business Week. He lives in Atlanta, Georgia.