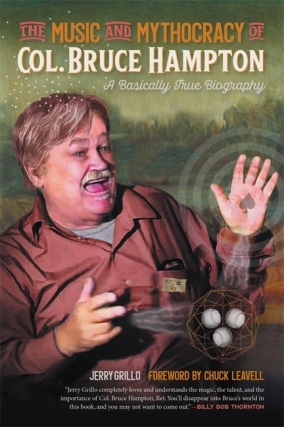 Location:
Georgia Center for the Book on Zoom

Join the Georgia Center for the Book for an evening with author Jerry Grillo to talk about his new book, "The Music and Mythocracy of Col. Bruce Hampton: A Basically True Biography." Grillo will be joined by writer, actor, teacher, and comedian Doug Monroe and AJC reporter Bo Emerson. This virtual event is free and open to the public, but you must register on Eventbrite to receive the link to the Zoom webinar.

A Cappella Books will have signed copies of “The Music and Mythocracy of Col. Bruce Hampton” available after the event. Pre-order via the link below. At checkout, choose between the local delivery, curbside pick-up, or shipping options. For zip codes not listed in the above banner, select curbside pick-up or USPS shipping.

Col. Bruce Hampton was a charismatic musical figure who launched and continued to influence the jam band genre over his fifty-plus years performing. Part bandleader, soul singer, storyteller, conjuror, poet, preacher, comedian, philosopher, and trickster, Col. Bruce actively sought out and dealt in the weird, wild underbelly of the American South. "The Music and Mythocracy of Col. Bruce Hampton" is neither a true biography in the Boswellian sense nor a work of cultural studies, although it combines elements of both. Even as biographer Jerry Grillo has investigated and pursued the facts, this life history of Col. Bruce reads like a novel-one full of amazing tales of a musical life lived on and off the road.

Grillo's interviews with Hampton and his bandmates, family, friends, and fans paint a fascinating portrait of an artist who fostered some of the best music ever played in America. Grillo aims not so much to document and demystify the self-mythologizing performer as to explain why his fans and friends loved him so dearly. Hampton's family history, his place in Atlanta and southeastern musical history, his significant friendships and musical relationships, and the controversies over personnel in his Hampton Grease Band over the years are all discussed. What emerges is a portrait of a P. T. Barnum of the musical world, but one who included his audience and invited them through the tent door to share his inside joke, with plenty of joy to go around.

Jerry Grillo is a longtime journalist whose work has appeared in Georgia Trend , Atlanta Magazine , Paste Magazine , Newsday, and jambands.com, among other publications. Grillo has won numerous writing awards from the Society of Professional Journalists, the Atlanta Press Club, the Magazine Association of the Southeast and the Georgia Press Association.