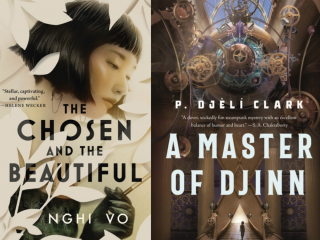 Join Georgia Center for the Book and the AJC Decatur Book Festival for the 2021 Joshilyn Jackson Summer Reading Series. This year, Joshilyn and her co-captain, Atlanta author and journalist Nicki Salcedo, have curated a selection of some of the year’s best reads, including the two books featured in this author program.

Salcedo will appear in conversation with P. Djèlí Clark (author of “A Master of Djinn”) and Nghi Vo (author of “The Chosen and the Beautiful”) on June 15, 2021, at 7 PM (EST). Tickets are free and open to the public, but you must register on Eventbrite below to receive the link to the Zoom webinar.

A Cappella Books will have copies of both titles available after the event. Pre-order via the link below. At checkout, choose between the local delivery, curbside pick-up, or shipping options. For zip codes not listed in the above banner, select curbside pick-up or USPS shipping.

Pre-order “A Master of Djinn”

Pre-order “The Chosen and the Beautiful”

About “A Master of Djinn”

Cairo, 1912: Though Fatma el-Sha’arawi is the youngest woman working for the Ministry of Alchemy, Enchantments and Supernatural Entities, she’s certainly not a rookie, especially after preventing the destruction of the universe last summer.

So when someone murders a secret brotherhood dedicated to one of the most famous men in history, al-Jahiz, Agent Fatma is called onto the case. Al-Jahiz transformed the world forty years ago when he opened up the veil between the magical and mundane realms, before vanishing into the unknown. This murderer claims to be al-Jahiz, returned to condemn the modern age for its social oppressions. His dangerous magical abilities instigate unrest in the streets of Cairo that threaten to spill over onto the global stage.

Alongside her Ministry colleagues and a familiar person from her past, Agent Fatma must unravel the mystery behind this imposter to restore peace to the city—or face the possibility he could be exactly who he seems…

About “The Chosen and the Beautiful”

Jordan Baker grows up in the most rarefied circles of 1920s American society—she has money, education, a killer golf handicap, and invitations to some of the most exclusive parties of the Jazz Age. She’s also queer and Asian, a Vietnamese adoptee treated as an exotic attraction by her peers, while the most important doors remain closed to her.

But the world is full of wonders: infernal pacts and dazzling illusions, lost ghosts and elemental mysteries. In all paper is fire, and Jordan can burn the cut paper heart out of a man. She just has to learn how.

Nghi Vo’s debut novel “The Chosen and the Beautiful” reinvents this classic of the American canon as a coming-of-age story full of magic, mystery, and glittering excess, and introduces a major new literary voice.

Born in New York and raised mostly in Houston, P. Djèlí Clark spent the formative years of his life in the homeland of his parents, Trinidad and Tobago. He is the award winning and Hugo and Sturgeon nominated author of the novellas “The Black God’s Drums” and “The Haunting of Tram Car 015.” His writings have appeared in online venues such as Tor.com, Daily Science Fiction, Heroic Fantasy Quarterly, Apex, Lightspeed, Beneath Ceaseless Skies, and in print anthologies including, Griots, Hidden Youth and Clockwork Cairo. His short story “The Secret Lives of the Nine Negro Negro Teeth of Washington” (Fireside Fiction) has earned him both a Nebula and Locus award. He is also a founding member of FIYAH Literary Magazine and an infrequent reviewer at Strange Horizons.

Nghi Vo is the author of the acclaimed novellas “When the Tiger Came Down the Mountain” and “The Empress of Salt and Fortune,” a Hugo Award and Ignyte Award finalist and the winner of the Crawford Award. Born in Illinois, she now lives on the shores of Lake Michigan. She believes in the ritual of lipstick, the power of stories, and the right to change your mind. “The Chosen and the Beautiful” is her debut novel.