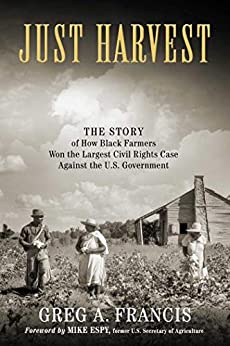 When a class-action lawsuit against the US government results in a billion-dollar settlement for the aggrieved parties, you’d expect the story to be headline news . . .to be posted on social media everywhere . . . to be adapted to film or even to a popular legal procedural series on TV . . .

The Jimmy Carter Presidential Library and A Cappella Books welcome Civil Rights attorney and author Greg Francis for a virtual discussion of his new book “Just Harvest: The Story of How Black Farmers Won the Largest Civil Rights Case against the U.S. Government,” on Monday, June 21, at 7 PM (EST). Francis will appear in conversation with trailblazing urban agriculturist, author, community developer, and Founder of Truly Living Well & The Nuri Group, K. Rashid Nuri.

A Cappella Books will have copies of both "Just Harvest" and K. Rashid Nuri’s book, “Growing Out Loud: Journey of a Food Revolutionary” available after the event. Pre-order copies via the links below. At checkout, choose between the local delivery, curbside pick-up, or shipping options. For zip codes not listed in the above banner, select curbside pick-up or USPS shipping.

Why have so many people never heard of Pigford vs. Glickman?

Or the follow-up lawsuit, Pigford II?

Or the Black Farmers Case, as the pair of these legal actions is often called?

Could it be that the heart-wrenching story of Black farmers in America, and the monumental legal case that brought long-sought justice to them, is rarely told because it reflects so poorly on the US and its treatment of those whose ancestors helped make the nation an agricultural giant in the first place?

Whatever the reason, the time to tell the full story has come and the person to share the gripping details is Greg Francis, one of the lead counsels in the historic case that finally helped Black farmers achieve equity. In “Just Harvest,” Francis narrates the dramatic twists and turns of the legal battle fought and won and evidences the many years of ingrained discrimination and racism that preceded it. Awareness of this story makes us all witnesses to the history still unfolding— and while parts of what is recounted herein will enrage you, the hope is that this book will also inspire, inform, and motivate you to join the continuing fight for the rights of all Black farmers now and in the future.

K. Rashid Nuri had a powerful "burning bush" revelation while a student at Harvard. The experience set him on a global food odyssey, managing agricultural operations in the U.S., Europe, Asia and Africa. Rashid saw, up close, the abuses and inefficiencies of Big Ag. “Growing Out Loud” is an uncompromising, unapologetic polemic, offering solutions for America's antiquated food system, as well as arguments that demonstrate its failures. Beyond the 360 degrees of food production, the book reveals pains and errors that catalyzed Rashid's intellectual and spiritual growth. “Growing Out Loud” speaks to the new generation of food revolutionaries about personal and social transformation.

Awarded the Vince Monroe Townsend Legends Award by the National Bar Association for historic leadership in the area of Civil Rights and designated as a Game Changer by Politic365, Greg A. Francis currently serves as lead counsel for the historic Black Farmers case. This national class action challenged the ongoing disparate treatment of Black Farmers across the United States resulting in a $1.25 billion dollar settlement. Nearly 20,000 Black farmers or their descendants received the “JUSTICE” they had long demanded. In RE: Black Farmers is the largest settlement of a Civil Rights case in the history of the American Civil Justice system.

Francis began his legal career in 1994 as an associate with a statewide defense firm specializing in medical malpractice defense, nursing home defense and municipal defense.

In 2001, Francis joined the law firm of Morgan and Morgan, P.A., as a Partner, focusing his practice on medical malpractice, police misconduct, wrongful death and catastrophic personal injury cases. In 2018, Francis joined longtime friend and colleague Joseph A. Osborne in forming their own firm, Osborne & Francis, PLLC. The firm has offices in Boca Raton and Orlando. Their firm will focus primarily on product liability, medical device litigation, pharmaceutical litigation, medical malpractice and personal injury litigation.

Mr. Francis was born in the Panama Canal Zone and moved to the United States as a young child. He graduated from Oak Ridge High School with honors in 1986. Francis then earned a Bachelor of Arts in Criminal Justice from the University of Florida in 1991, and a Juris Doctorate in 1994 from the University of Florida Law School, where he was a Virgil Hawkins Fellow. In law school, he received writing and oral honors in Appellate Advocacy and was named to the Dean’s List. He was appointed as a Justice for the University of Florida Board of Masters, the highest Appellate Court for student disciplinary matters, and rose to the level of Senior Presiding Justice in 1994. He was also a member of the Frederick Douglas Moot Court Team and Publishing Editor for the UMDJA Law Journal. As a result of his academic achievements and extracurricular activities, he was inducted into the prestigious Florida Blue Key Leadership honorary society.

Currently, Francis volunteers his time to a number of local non-profit organizations. Most recently, he launched his own philanthropic platform, Believing In Good, which funds and hosts an annual “For the Kids” toy drive where he returns to the neighborhood of his childhood and distributes Christmas gifts to the children. He serves on the Board of Trustees for St. Mark AME, is a member of the Orlando Chapter of 100 Black Men of America and a Board member for Nap Ford Charter School. Francis is married to the former Keisha Berry, has a daughter, Grier, a son, Gregorio II (Rio), and resides in Windermere, Florida.

K. Rashid Nuri had a powerful "burning bush" revelation while a student at Harvard. The experience set him on a global food odyssey, managing agricultural operations throughout the U.S., 35 countries in Europe, Asia, and Africa.

During the Clinton Administration, Rashid served at USDA as the Deputy Vice-President for the Commodity Credit Corporation and the Deputy Administrator for the Farm Service Agency and Foreign Agriculture Service. He formulated policy for administrative operations affecting some 34,000 employees in more than 3,000 sites. He was directly responsible for a workforce of 2,200 employees. His duties included maintaining accounting, financial, and claims system activities for yearly outlays ranging from $18-$24 billion, including budget analyses, forecasts, and tracked administrative expenses, appropriated funds, corporate funds, and funds allocated from other sources.

During his years at USDA, Rashid saw, up close, the abuses and inefficiencies of Big Ag. Under the leadership of Agriculture Secretary Mike Espy, Rashid commissioned the 'Miller Report,' which chronicled the role of Big Ag and the U.S. Government in the century-long destruction of Black Farmers. The report was buried, and Rashid fired.

Now, as the CEO of The Nuri Group, Rashid is working to expand equitable access to the tools for success in agriculture through education, funding, partnerships, and appropriate regulations. Rashid is the author of Growing Out Loud: Journey of a Food Revolutionary, which chronicles his journeys, the failing state of the food supply, and offers guidance for the new food movement.