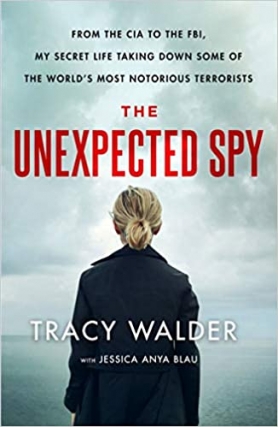 For fans of “Homeland,” this highly entertaining memoir traces a young woman’s journey from a college sorority straight to the CIA, where she hunted terrorists and investigated WMDs.

The Marcus Jewish Community Center of Atlanta welcomes author Tracy Walder for a discussion with Atlanta media personality Holly Firfer on her book, “The Unexpected Spy: From the CIA to the FBI, My Secret Life Taking Down Some of the World's Most Notorious Terrorists,” on Thursday, October 7, 2021, at 7:30 PM (EST).

-Admit one for $36 (includes a hardcover copy of “The Unexpected Spy.” Price covers shipping.) All books will be shipped after the event.

When Tracy Walder enrolled at the University of Southern California, she never thought that one day she would offer her pink beanbag chair in the Delta Gamma house to a CIA recruiter, or that she’d fly to the Middle East under an alias identity.

“The Unexpected Spy” is the riveting story of Walder's tenure in the CIA and, later, the FBI. In Virginia, Walder watched al-Qaeda members with drones as President Bush looked over her shoulder and CIA Director George Tenet brought her donuts. She tracked chemical terrorists and searched the world for Weapons of Mass Destruction. Driven to stop terrorism, Walder debriefed terrorists―men who swore they’d never speak to a woman―until they gave her leads. Then Walder moved to the FBI, where she worked in counterintelligence. In a single year, she helped take down one of the most notorious foreign spies ever caught on American soil. Catching the bad guys wasn’t a problem in the FBI, but rampant sexism was. Walder left the FBI to teach young women, encouraging them to find a place in the FBI, CIA, State Department or the Senate―and thus change the world.

Tracy Walder is a former Staff Operations Officer (SOO) at the CIA's Counterterrorism Center and a Special Agent at the FBI's Los Angeles Field Office specializing in Chinese counterintelligence operations. She now teaches global terrorism at the all-girls Ursuline Academy in Dallas and is an adjunct professor of Domestic Terrorism and Criminal Justice at Texas Christian University in Ft. Worth. She is on the Board of Directors for Girl Security, a nonprofit, nonpartisan group that brings national security curriculum to girls in high school throughout the US