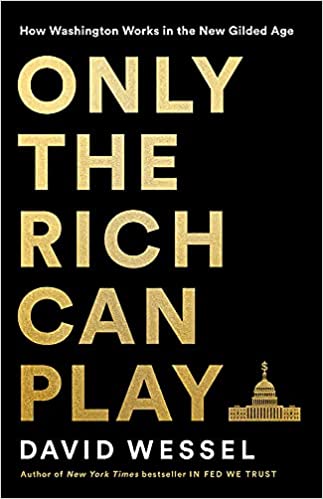 In a “Winners Take All” meets “This Town” narrative, a New York Times bestselling author tells the story of the creation of a massive tax break, in which political and economic elites attend to the care and feeding of the super-rich, and inequality compounds.

The Jimmy Carter Presidential Library and A Cappella Books welcome David Wessel for a virtual discussion of “Only the Rich Can Play: How Washington Works in the New Gilded Age,” on Wednesday, October 20, 2021, at 7 PM (EST). Wessel will appear in conversation with David Rubenstein, former deputy domestic policy advisor to President Jimmy Carter, philanthropist, and co-founder and co-executive chairman of The Carlyle Group.

A Cappella Books will have copies of " Only the Rich Can Play," which will include a bookplate signed by the author, available after the event. Pre-order via the link below.

David Wessel's incredible tale of how Washington works-and why the rich keep getting richer-starts when a Silicon Valley entrepreneur develops an idea intended as a way to help poor people that will save rich people money on their taxes. He organizes and pays for an effective lobbying effort that pushes his idea into law with little scrutiny or fine-tuning by congressional or Treasury tax experts-and few safeguards against abuse. With an unbeatable pair of high-profile sponsors, bumper-sticker simplicity and deft political marketing, the Opportunity Zone became an unnoticed part of the 2017 Trump tax bill.

David Wessel follows the money to see who profited from this plan that was supposed to spur development of blighted areas and help people out of poverty: the Las Vegas strip, the Portland (Oregon) Ritz-Carlton, the Mall of America, and self-storage facilities-lucrative areas where the one percent can park money profitably and avoid capital gains taxes. And the best part: unlike other provisions for eliminating capital gains taxes (inheritance, for example) you don't have to die to take advantage of this one.

Wessel provides vivid portraits of the proselytizers, political influencers, motivational speakers, consultants, real estate dealmakers, and individual money-seekers looking to take advantage of this twenty-first century bonanza. He looks at places for which Opportunity Zones were supposedly designed (Baltimore, for example) and how little money they've drawn. And he finds a couple of places (Erie, PA) where zones are actually doing what they were supposed to, a lesson on how a better designed program might have helped more left-behind places. But what Wessel reveals is the gritty reality: The dark underbelly of a system tilted in favor of the few, with the many left out in the cold

David Wessel is a senior fellow and director of the Hutchins Center on Fiscal & Monetary Policy at the Brookings Institution. He joined Brookings in 2014 after 30 years as a reporter, editor, and columnist at The Wall Street Journal. He is the author of two New York Times bestsellers: “In Fed We Trust: Ben Bernanke’s War on the Great Panic” (2009) and “Red Ink: Inside the High-Stakes Politics of the Federal Budget” (2012.) He has shared two Pulitzer Prizes, one in 1984 for Boston Globe series on the persistence of racism in Boston and the other in 2003 for Wall Street Journal series on corporate wrongdoing. He appears often on NPR’s Morning Edition and tweets frequently at @davidmwessel. He resides in Washington, D.C.