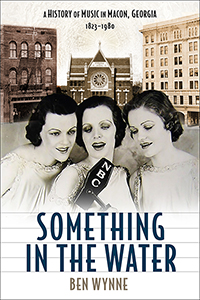 The history of Macon, Georgia, has an exceptional soundtrack. With his new book, “Something in the Water,” author and historian Ben Wynne provides a lively narrative of the city's musical past from its founding in 1823 to 1980.

A Cappella Books welcomes Wynne for an in-store talk and book signing on Saturday, November 13, 2021, at 4 PM. This event is free and open to the public, and copies of “Something in the Water: A History of Music in Macon, Georgia, 1823-1980” will be available for purchase.

For generations, talented musicians have been born in or passed through Macon's confines. Some lived and died in obscurity, while others achieved international stardom. From its pioneer origins to the modern era, the city has produced waves of talent with amazing consistency, representing a wide range of musical genres including country, classical, jazz, blues, big band, soul, and rock. As the book points out, the city's influence stretches far beyond the borders of Georgia, and its musical imprint on the United States and the world is significant. The story of music in Macon includes a vast, eclectic cast of characters, such as the city's first music "celebrity" Sidney Lanier, entertainment entrepreneur Charles Douglass, jazz age divas Lucille Hegamin and Lula Whidby, big band singers Betty Barclay and the Pickens Sisters, rock and roll founding father Little Richard Penniman, rhythm and blues icons James Brown and Otis Redding, local country star Eugene "Uncle Ned" Stripling, Capricorn Records founders Phil Walden and Frank Fenter, and The Allman Brothers Band, one of the most popular groups of the rock era. “Something in the Water” also offers a treatment of Macon's leading entertainment venues, both past and present, like Ralston Hall, the Grand Opera House, and the Douglass Theater, along with local institutions such as Wesleyan College, Mercer University, and the Georgia Academy for the Blind, which trained generations of music students.

Ben Wynne is a native of Florence, Mississippi, and serves as professor of History at the University of North Georgia in Gainesville. He specializes in Antebellum American Studies, the American South, and the Civil War Era, and is the author of multiple books related to Southern history and culture.