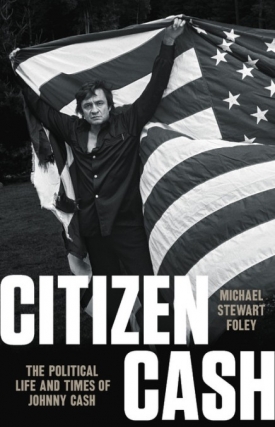 “This is an important reassessment of one of American music's greatest performers, revealing a complex artist of the first magnitude who used his art and empathy to parse for him the contradictory times he immortalized in his work.”―Ken Burns, filmmaker

In his latest book, leading historian Michael Stewart Foley argues that Johnny Cash was the most important political artist of his time. A Cappella Books and the Jimmy Carter Presidential Library welcome the author for a virtual discussion of “Citizen Cash” with GSU history professor and "Smoking Typewriters" author John McMillian on Tuesday, December 14, 2021, at 7 PM (EST).

A Cappella Books will have copies of “Citizen Cash" available after the event. Pre-order via the link below.

Johnny Cash was an American icon, known for his level, bass-baritone voice and somber demeanor, and for huge hits like “Ring of Fire” and “I Walk the Line.” But he was also the most prominent political artist in the United States, even if he wasn’t recognized for it in his own lifetime, or since his death in 2003.

Then and now, people have misread Cash’s politics, usually accepting the idea of him as a “walking contradiction.” Cash didn’t fit into easy political categories—liberal or conservative, Republican or Democrat, hawk or dove. Like most people, Cash’s politics were remarkably consistent in that they were based not on ideology or scripts but on empathy—emotion, instinct, and identification.

Drawing on untapped archives and new research on social movements and grassroots activism, “Citizen Cash” offers a major reassessment of a legendary figure.

Michael Stewart Foley is a historian of American political culture. He is the author or editor of seven other books, including the prizewinning “Confronting the War Machine: Draft Resistance During the Vietnam War,” “Front Porch Politics: The Forgotten Heyday of American Activism in the 1970s and 1980s,” and the 33 1/3 book on punk band Dead Kennedys’ political masterpiece, “Fresh Fruit for Rotting Vegetables.” He has served as historical advisor on a number of films and television shows, including “Mad Men,” and his writing has appeared in the New York Times, the Guardian, the Boston Sunday Globe, and the Daily Beast, among other news outlets. He is Professor of American Civilization at Université Grenoble Alpes in France.