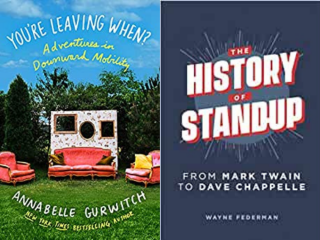 Laughter is the best medicine! Join the Marcus Jewish Community Center of Atlanta for what promises to be a highly entertaining discussion on comedy with “The History of Stand-Up” author Wayne Federman and “You’re Leaving When?” author Annabelle Gurwitch on Sunday, November 21, 202, at 7:30 PM (EST).

-Admit one for $50 (includes paperback copies of both titles. Price covers shipping.) All books will be shipped after the event.

About “The History of Stand-Up”

Today’s top stand-up comedians sell out arenas, generate millions of dollars, tour the world, and help shape our social discourse. So, how did this all happen? The History of Stand-Up chronicles the evolution of this American art form – from its earliest pre-vaudeville practitioners like Artemus Ward and Mark Twain to present-day comedians of HBO and Netflix. Drawing on his acclaimed History of Stand-up podcast and popular university lectures, veteran comedian and adjunct USC professor Wayne Federman guides us on this fascinating journey.

The story has a connective tissue – humans standing on stage, alone, trying to get laughs. That experience connects all stand-ups through time, whether it's at the Palace, the Copacabana, the Apollo, Mister Kelly’s, the hungry i, Grossinger's, the Comedy Cellar, the Improv, the Comedy Store, Madison Square Garden, UCB, or at an open mic in a backyard.

Wayne Federman is an Emmy-nominated stand-up, actor, author, producer, and professor. He has appeared in numerous television shows and films including “Curb Your Enthusiasm,” “Silicon Valley,” “Step Brothers,” “Knocked Up,” “The X-Files,” and “Legally Blonde.” Federman co-produced the Emmy-winning documentary “The Zen Diaries of Garry Shandling” and is currently co-producing a George Carlin documentary for HBO. He is a tenured, adjunct professor of stand-up comedy history and performance at USC.

About “You’re Leaving When?”

From the New York Times bestselling author of “I See You Made an Effort” comes a timely and hilarious chronicle of downward mobility, financial and emotional. With signature “sharp wit” (NPR), Annabelle Gurwitch gives irreverent and empathetic voice to a generation hurtling into their next chapter with no safety net and proving that our no-frills new normal doesn’t mean a deficit of humor. In these essays, Gurwitch embraces homesharing, welcoming a housing-insecure young couple and a bunny rabbit into her home. The mother of a college student in recovery who sheds the gender binary, she relearns to parent, one pronoun at a time. She wades into the dating pool and flunks the magic of tidying up. Gurwitch offers stories of resilience, adaptability, low-rent redemption, and the kindness of strangers. Even in a Zoom.

Annabelle Gurwitch is an actress, activist, and New York Times bestselling author of “I See You Made an Effort”  (a Thurber Prize finalist). Other books: “Wherever You Go, There They Are”; “You Say Tomato, I Say Shut Up (with Jeff Kahn)”; and “Fired!” (also a Showtime Comedy Special). She’s is currently adapting “You're Leaving When?” for HBO with Bill Maher executive producing, centering on her Los Angeles Times op-ed about hosting an at-risk housing insecure couple in her home. Gurwitch was the longtime cohost of “Dinner & a Movie” on TBS; a regular commentator on NPR; host of “WA$TED” for the Discovery Channel, the news anchor of HBO’s award-winning “Not Necessarily the News,” and a resident humorist for TheNation.com. Gurwitch thought she'd be empty nesting by now; instead, she lives with her cat and child—a college graduate of the COVID class of 2020. She co-hosts the “Tiny Victories” podcast on the Maximum Fun Podcast Network, which Vulture called a “bright spot of light and laughter in 2020.”