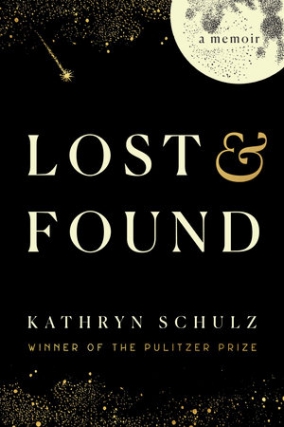 Eighteen months before Kathryn Schulz’s beloved father died, she met the woman she would marry. In her new book, the Pulitzer Prize-winning New Yorker staff writer weaves the stories of those relationships into a brilliant exploration of how all our lives are shaped by loss and discovery—from the maddening disappearance of everyday objects to the sweeping devastations of war, pandemic, and natural disaster; from finding new planets to falling in love.

Pre-order your copy of “Lost & Found” via the link below.

Three very different American families form the heart of “Lost & Found”: the one that made Schulz’s father, a charming, brilliant, absentminded Jewish refugee; the one that made her partner, an equally brilliant farmer’s daughter and devout Christian; and the one she herself makes through marriage. But Schulz is also attentive to other, more universal kinds of conjunction: how private happiness can coexist with global catastrophe, how we get irritated with those we adore, how love and loss are themselves unavoidably inseparable. The resulting book is part memoir, part guidebook to living in a world that is simultaneously full of wonder and joy and wretchedness and suffering—a world that always demands both our gratitude and our grief.

A staff writer at The New Yorker and winner of the Pulitzer Prize, Kathryn Schulz writes with curiosity, tenderness, erudition, and wit about our finite yet infinitely complicated lives. Crafted with the emotional clarity of C. S. Lewis and the intellectual force of Susan Sontag, “Lost & Found” is an uncommon book about common experiences.

Parul Sehgal is a staff writer at The New Yorker. Previously, she was a book critic at the New York Times, where she also worked as a senior editor and columnist. She has won awards from the New York Press Club and the National Book Critics Circle for her criticism. She teaches in the graduate creative-writing program at New York University.