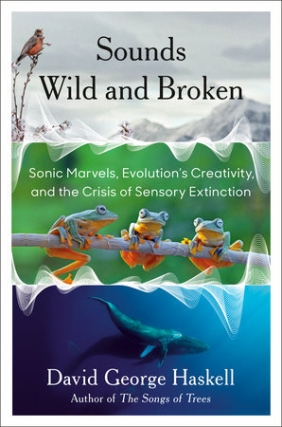 In his new book, Pulitzer Prize-nominated nature writer David Haskell takes us on a lyrical exploration of the diverse sounds of our planet, the creative processes that produced these marvels, and the perils that sonic diversity now faces.

A Cappella Books welcomes the author for a discussion of his captivating new book, “Sounds Wild and Broken: Sonic Marvels, Evolution's Creativity, And The Crisis Of Sensory Extinction.” Haskell will appear in conversation with our very own Clara Nibbelink.

This event is free and open to the public, and copies of “Sounds Wild and Broken” will be available for purchase.

We live on a planet alive with song, music, and speech. David Haskell explores how these wonders came to be. In rain forests shimmering with insect sound and swamps pulsing with frog calls we learn about evolution’s creative powers. From birds in the Rocky Mountains and on the streets of Paris, we discover how animals learn their songs and adapt to new environments. Below the waves, we hear our kinship to beings as different as snapping shrimp, toadfish, and whales. In the startlingly divergent sonic vibes of the animals of different continents, we experience the legacies of plate tectonics, the deep history of animal groups and their movements around the world, and the quirks of aesthetic evolution

Starting with the origins of animal song and traversing the whole arc of Earth history, Haskell illuminates and celebrates the emergence of the varied sounds of our world. In mammoth ivory flutes from Paleolithic caves, violins in modern concert halls, and electronic music in earbuds, we learn that human music and language belong within this story of ecology and evolution. Yet we are also destroyers, now silencing or smothering many of the sounds of the living Earth. Haskell takes us to threatened forests, noise-filled oceans, and loud city streets, and shows that sonic crises are not mere losses of sensory ornament. Sound is a generative force, and so the erasure of sonic diversity makes the world less creative, just, and beautiful. The appreciation of the beauty and brokenness of sound is therefore an important guide in today’s convulsions and crises of change and inequity.

“Sounds Wild and Broken” is an invitation to listen, wonder, belong, and act.

David Haskell’s work integrates scientific, literary, and contemplative studies of the natural world. He is a professor of biology and environmental studies at the University of the South and a Guggenheim Fellow. His 2017 book The Songs of Trees won the John Burroughs Medal for Distinguished Natural History Writing. His 2012 book The Forest Unseen was a finalist for the Pulitzer Prize and the PEN/E.O. Wilson Literary Science Writing Award and won the 2013 Best Book Award from the National Academies, the National Outdoor Book Award, and the Reed Environmental Writing Award.