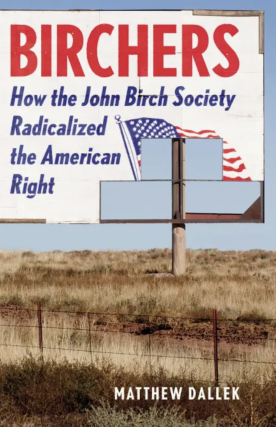 "The John Birch Society was once considered so far out on the paranoid fringe that it was synonymous with kookiness. In his fascinating and scrupulously researched narrative, Dallek shows how the Republican Party's extremists took over the GOP. Revelatory and readable, "Birchers" is essential history for anyone trying to understand American politics."—Jane Mayer, author of "Dark Money"

The Jimmy Carter Presidential Library and A Cappella Books welcome author Matthew Dallek for a discussion of his book, "Birchers: How the John Birch Society Radicalized the American Right." Dallek will appear in conversation with Joseph Crespino, Jimmy Carter Professor of History at Emory University and author of "Atticus Finch: The Biography."

At the height of the John Birch Society's activity in the 1960s, critics dismissed its members as a paranoid fringe. After all, "Birchers" believed that a vast communist conspiracy existed in America and posed an existential threat to Christianity, capitalism, and freedom. But as historian Matthew Dallek reveals, the Birch Society's extremism remade American conservatism. Most Birchers were white professionals who were radicalized as growing calls for racial and gender equality appeared to upend American life. Conservative leaders recognized that these affluent voters were needed to win elections, and for decades the GOP courted Birchers and their extremist successors. The far-right steadily gained power, finally toppling the Republican establishment and electing Donald Trump.

"Birchers" is a deeply researched and indispensable new account of the rise of extremism in the United States.

Matthew Dallek is a historian and professor of political management at George Washington University's College of Professional Studies. The author of "The Right Moment and Defenseless Under the Night," his writing has appeared in the New York Times, Washington Post, the Los Angeles Times, Politico, and other publications. He lives in Washington, DC.