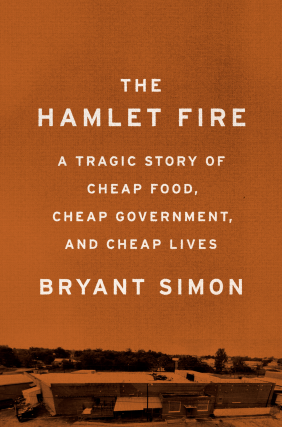 ABOUT THE BOOK
"It is testament to Simon’s reportorial instincts and research that he has found this sprawling. . . story in the detritus of that now-forgotten fire. His trail from that day through poultry economics to a core of new American values is captivating and brilliantly conceived, and will provide readers with insights into our current national politics."
—The Washington Post

For decades, the small, quiet town of Hamlet, North Carolina, thrived thanks to the railroad. But by the 1970s, it had become a postindustrial backwater, a magnet for businesses searching for cheap labor with little or almost no official oversight. One of these businesses was Imperial Food Products. The company paid its workers a dollar above the minimum wage to stand in pools of freezing water for hours on end, scraping gobs of fat off frozen chicken breasts before they got dipped in battered and fried into golden brown nuggets and tenders. If a worker complained about the heat or the cold or missed a shift to take care of their children or went to the bathroom too often they were fired. But they kept coming back to work because Hamlet was a place where jobs were scarce. Then, on the morning of September 3, 1991, the day after Labor Day, this factory that had never been inspected burst into flame. Twenty-five people—many of whom were black women with children, living on their own—perished that day behind the plant’s locked and bolted doors.

Eighty years after the Triangle Shirtwaist Fire, industrial disasters were supposed to have been a thing of the past. After spending several years talking to local residents, state officials, and survivors of the fire, award-winning historian Bryant Simon has written a vivid, potent, and disturbing social autopsy of this town, this factory, and this time that shows how cheap labor, cheap government, and cheap food came together in a way that was bound for tragedy.